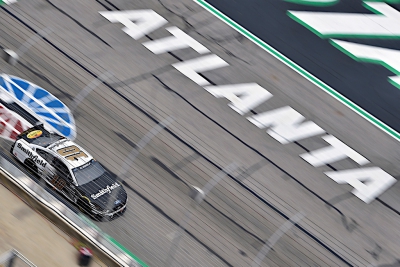 ● The No. 10 Smithfield Ford driver was fast at the drop of the green flag, moving up to 13th by lap five. Almirola reported his Ford Mustang had good balance in the opening laps.

● On lap 20, Almirola told his Smithfield Racing team that his Ford Mustang was beginning to tighten as the run continued. By the time the lap-25 competition caution waved, he had fallen back to 17th. The team pitted during the yellow for four tires, fuel and a front air pressure adjustment.

● As the race progressed, the Tampa, Florida, native continued to battle with a tight racecar and dropped back to 23rd, where he finished Stage 1.

● The Smithfield team pitted during the stage break for four tires, fuel and adjustments to air pressure and wedge to combat their tight racecar.

● When the green flag waved on the lap-86 restart, the No. 10 Smithfield Ford Mustang jumped to 16th and stayed in the top-20 until lap 100. Almirola reported that his car needed to be freed up on the team’s next pit stop.

● With rain on the radar, the No. 10 team opted to keep their driver on the track as green-flag pit stops got underway in an attempt to put themselves in a good position if the caution flag waved. Almirola took the lead on lap 123 and stayed there for eight laps before he was forced to pit for four fresh tires, fuel and an air pressure adjustment.

● Almirola rejoined the field 25th and ended the stage there, one lap down.

● During the stage break, the team pitted once again for four tires, fuel and another air pressure adjustment in an attempt to help the balance of their Ford Mustang.

● Before the stage could go green, NASCAR put out a red flag for track repair at Atlanta Motor Speedway on lap 167, as part of the track was coming up. The No. 10 Smithfield team used this break in racing to discuss their strategy for the remaining 93 laps.

● On lap 181, the Smithfield Ford driver reported that his Ford Mustang was loose on the initial run in the stage.

● When green-flag pit stops got underway on lap 210, the No. 10 team brought their Ford Mustang down pit road for four tires, fuel and a track bar adjustment.

● As the final laps went caution free, Almirola was unable to recover his lost laps and finished 23rd, the first car two laps down.

● Almirola led one time for eight laps, increasing his laps-led total at Atlanta to 44.

● Kurt Busch won the Atlanta 400 to score his 33rd career NASCAR Cup Series victory, his first of the season and his fourth at Atlanta. His margin over second-place Kyle Busch was 1.237 seconds.

● Eighteen of the 37 drivers in the Atlanta 400 finished on the lead lap.

● Denny Hamlin remains the championship leader after Atlanta with a 10-point advantage over second-place Kyle Larson.

“It was just a rough day at Atlanta. The balance was off on our Smithfield Ford Mustang for most of the race. We were hoping the rain would work out in our favor there in the second stage, but ultimately, we had to come to pit road in the end. We’ll move on to New Hampshire.”