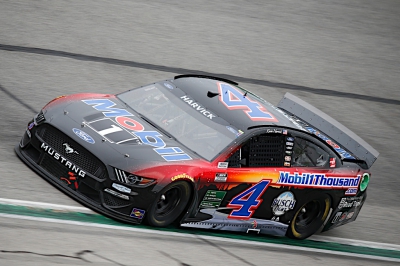 ●  The No. 4 Mobil 1 Summer Road Trip Ford Mustang was 20th when the competition caution came out after 25 laps.

●  Pitted on lap 27 for four tires and fuel. Only adjustment was to tire pressures.

●  “Need to rotate just a little bit better through the center (of the corner),” said Harvick on lap 74 while running 11th.

●  Cracked top-10 on lap 78 with a pass of Brad Keselowski and held the position through the end of the stage.

●  Pitted for four tires and fuel at the conclusion of the stage, but had to pit again on lap 85 to repair right-front fender after contact with the car of Martin Truex Jr., upon leaving pit box.

●  “Absolutely horrible,” said a 23rd-place Harvick while mired in traffic on lap 94. “Just way too loose when I touch the throttle.”

●  Made scheduled, green flag pit stop for four tires, fuel and a chassis adjustment on lap 119 while running 17th.

●  In final nine laps of the stage, Harvick rallied his way to 11th.

●  Pitted for four tires and fuel with a chassis adjustment upon the conclusion of the stage.

●  There was a 19-minute red flag period prior to the final stage to make track repairs just before the start/finish line.

●  Made scheduled, green flag pit stop on lap 211 for four tires, fuel and a chassis adjustment.

●  Once pit stops cycled through by lap 213, Harvick was up to 11th, a position he held through the finish.

●  Harvick has finished 11th or better in his last eight NASCAR Cup Series starts at Atlanta.

●  Kurt Busch won the Atlanta 400 to score his 33rd career NASCAR Cup Series victory, his first of the season and his series-leading fourth at Atlanta. His margin over second-place Kyle Busch was 1.237 seconds.

●  Denny Hamlin remains the championship leader after Atlanta with a 10-point advantage over second-place Kyle Larson.

The next event on the NASCAR Cup Series schedule is the Foxwoods Resort Casino 301 on Sunday, July 18 at New Hampshire Motor Speedway in Loudon. The race starts at 3 p.m. EDT with live coverage provided by NBCSN and SiriusXM NASCAR Radio.