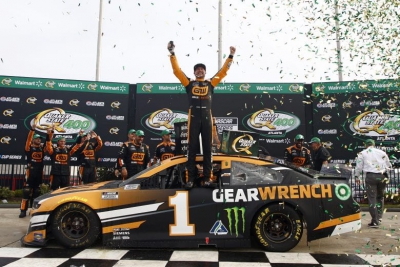 After 260 laps, a brief red flag and an epic battle with his brother, Kurt Busch was able to wheel his Chip Ganassi Racing Chevrolet into victory lane Sunday afternoon. His Quaker State 400 victory was his first win of the 2021 season and his first win in 26 races.

Busch was able to lead 144 laps working his way meticulously through groups of lapped cars in the midst of the battle for the win.

“Hell yeah we beat Kyle [Busch]! I taught that kid everything he knows; he should be grateful. What a battle and what a genuine, awesome, old-school racetrack and I asked the track today, ‘last time here on your old asphalt, can I get an old guy to win?’ and she answered. Thank you to Atlanta Motor Speedway,” Kurt Busch joked in his post-race interview with NBC Sports.

“I don't know where I’m going, [next year] but I just love racing cars and I want to race that Next Gen car next year; that’s why I’m trying to stick around,” Busch continued.

Earlier this week, Speedway Motorsports announced that the 1.5 mile track will undergo a reconfiguration narrowing the track as well as adding banking to the corners. The project is set to start next week, meaning this was the last time NASCAR will compete on what some people call a “cheese grater” surface.

Chase Elliott started on pole with Saturday’s Xfinity Series winner, Kyle Busch, starting second. The lone driver to drop to the rear of the field for the start was Martin Truex Jr. due to failing inspection twice earlier this morning.

Elliott got an enormous jump on the start and gapped the field by almost three car-lengths as he led the field into turn one. Elliott remained the leader until the No. 18 of Kyle Busch worked his way around the driver of the No. 9 on lap 14. Busch was able to sustain the lead until the competition caution flew on lap 25.

Under this yellow, everyone came down pit road to put four fresh tires on their car and make adjustments. Elliott was the biggest loser under this round of pit stops as he overshot his pit stall and went from third to eighteenth. Denny Hamlin won the race off pit road but was quickly overtaken by Busch by the conclusion of lap 30.

The first incident-related caution came out as the battle for the lead continued to heat up. Cody Ware made an aggressive four-wide move causing Daniel Suarez and Ricky Stenhouse Jr. to wreck on the backstretch. Suarez was able to continue while Stenhouse Jr. was forced to go to the garage; he would make his way back out on track later in the race.

Busch was able to lead all but 16 laps in the first stage en route to his stage one victory.

Under the stage break, Kurt Busch came off pit road ahead of young brother, Kyle, as the rain inched closer to the racetrack.

Lap 27 brought trouble to Joey Logano as he was forced to come down pit road with a loose wheel. William Byron and Matt Dibenedetto were the first drivers to make scheduled pit stops on lap 39. This pushed everyone to make the decision on whether or not to pit then or wait.

Aric Almirola and Ryan Preece made the gamble to stay out longer than the leaders in hope for rain but the bet did not pay off. Kurt Busch worked his way past both of those drivers and began extending his lead on Kyle Busch once more. The Busch brothers dominance continued as Kurt Busch cruised to the stage two win.

The red flag was displayed as the field was ready to take the green for track repair on the frontstretch. Kurt Busch maintained the lead after the restart as the battle for second started to get intense between Alex Bowman and Kyle Busch.

The flood gates opened on pit road with 49 laps to go when Joey Logano brought his Shell Pennzoil Mustang to receive service. Shortly after, all the leaders made their way to their teams and Kyle Busch cycled around to the lead. Kyle Larson was hit with a speeding on pit road penalty under these pit stops.

Similar to what happened in the first race at Atlanta this year, lapped traffic became a major factor in the outcome of the race. Ross Chastain held up Kyle Busch just long enough for his Chip Ganassi Racing teammate, Kurt Busch, to make his way past Kyle to return to the lead.

“He did his job as a teammate and Ross [Chastain] is going to get a little flack for it, but that's what it takes to be a good teammate at the right moment. I’ll pay him back eventually,” Kurt Busch said about the help from Chastain.

Kurt Busch was able to make his way through lapped traffic and outduel his brother to pick up the Quaker State 400 win and lock himself into the playoffs.