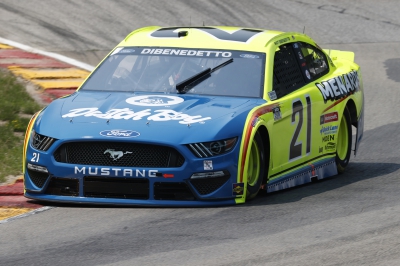 Matt DiBenedetto and the No. 21 Menards/Dutch Boy Paints team raced among the leaders throughout Sunday’s Jockey Made in America 250 at Road America, leading two times for 10 laps and coming home in 10th place.

It was the team’s fourth top-10 of 2021 and its first since a fourth-place finish on May 2 at Kansas Speedway.

DiBenedetto and the No. 21 Menards/Dutch Boy Mustang qualified seventh on Sunday morning, giving them their second-best starting spot of the season.

He ran in the top 10 for most of the first Stage, but pitted just prior to the end of that segment, which gave him a front-row starting spot for the second Stage.

DiBenedetto jumped into the lead and set the pace for five laps before dropping back.

Once again, he pitted prior to the end of the Stage, partly for strategy reasons but mostly because of a tire issue.

That put him in third place for the start of the final Stage of the 62-lap race. Once again, he took the lead just after the start and held the top spot for another five laps, which made him third in laps led for Sunday’s race.

But the same short-run speed that allowed DiBenedetto and his Menards/Dutch Boy Mustang to take the lead just after restarts hurt him on long runs, and the race ended with a 17-lap green-flag run. Still he held on for a top-10 finish and heads to Atlanta Motor Speedway pumped up about his prospects for the remainder of the season.

“I thought the adjustments we made and everything we did to get the car ready to qualify were great,” he said. “In the race, it was pretty clear we were a short-run car...but we made the most of it all day.

“The adjustments were good. The guys did a great job all weekend. We have been working hard to get our road-course cars better, and it was nice to get a glimpse of some hope and speed and to lead laps. I know we have to work on our long-run speed a little bit.

“I wanted to get Menards and Dutch Boy a good run…so it was nice to get a top-10 and lead laps.”

He said he and the Menards/Dutch Boy team, now led by crew chief Jonathan Hassler, are poised for a strong finish to the season.

DiBenedetto moved up one spot in the Cup Series standings to 20th place but is 74 points below the playoff cutline with six regular-season races remaining.