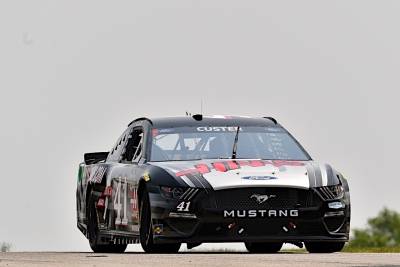 ● When the caution flag came out on just lap two of the 62-lap race, the HaasTooling.com team opted to keep their driver out.

● After the field got back to green on lap four, the team started checking for damage after reports of smoke coming from the right rear. Spotters found no smoke, but there was damage on the right rear sustained during the restart.

● Custer held steady in the top-15 and was running 12th when another caution flag flew with just three to go in the stage, which ended under the yellow.

● Custer came to pit road during the stage break for four fresh tires, fuel, a slight adjustment to loosen the racecar and to fix the damage on the right-rear quarter panel.

● At the beginning of the stage, the HaasTooling.com driver was served a penalty and forced to start at the rear of the field on the lap-16 restart.

● Custer spared no time in his march through the field as he was 26th by lap 25.

● The No. 41 team brought their Ford Mustang down pit road coming to three to go for four tires, fuel and a small adjustment to combat a lack of rear grip.

● Under the second stage break, the No. 41 team kept their driver on track instead of pitting to go along with their intended pit strategy.

● Custer reported at the start of the run that he still lacked rear grip on his No. 41 HaasTooling.com Ford Mustang. The team planned to work on it with some air pressure adjustments on their next stop.

● When the caution flag waved on lap 42, the Ladera Ranch, California, native brought his Ford Mustang down pit road for four tires, fuel and another air pressure adjustment. Custer reported that his racecar became extremely loose during the final run.

● Ultimately, the HaasTooling.com driver was unable to overcome his balance problems and finished 17th.

“It was a rough day at Road America, but it was awesome to be back for the holiday weekend. We had a solid car. We just struggled with a loose-handling racecar and didn’t have the short run speed we needed. I’m pretty excited to get to Atlanta and slip and slide around.”