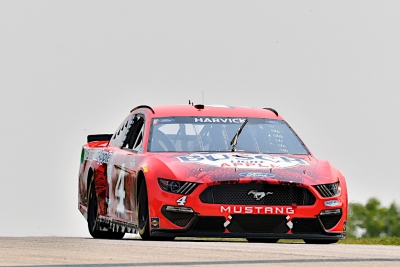 ● The No. 4 Busch Light Apple Ford Mustang dropped a pair of positions in the opening laps, falling to 27th by the time the first caution flag of the day appeared on lap three for a car stopped on track. Harvick said his racecar was loose in the righthand corners and tight in the lefthanders. He was 27th when the race went back to green on lap five.

● A second caution flag appeared on lap 11 for a car stuck in a gravel trap while Harvick was running 22nd. He said his racecar was still loose to the right and tight to the left.

● The stage finished under caution with Harvick running 18th after a handful of cars ahead of him had pitted just before the caution flag flew. He pitted during the break for tires, fuel and adjustments.

● The No. 4 Busch Light Apple Ford Mustang held its relative position until six laps remained in the stage, which went green from start to finish. Harvick began moving forward as cars ahead of him began to peel off track for their second round of pit stops. He stayed on track through the stage’s end, then pitted during the break for tires, fuel and adjustments.

● The No. 4 Busch Light Apple Ford Mustang dropped three positions in the opening lap of the stage, then held its relative position until the field began a green-flag pit stop cycle on lap 42, when he had moved up to 20th.

● The caution flag flew for a single-car incident before that lap was completed. Harvick reported his racecar was “still loose to the right.” He pitted for fuel, tires and air-pressure adjustments all around and restarted 15th on lap 45.

● Moving forward proved problematic for Harvick the rest of the way. He was running 21st on lap 57 when two cars at the front of the pack made contact and one of them spun off the track. Harvick was quickly called into the pits in anticipation of a caution flag, but the race stayed green.

● Harvick took four tires and a splash of fuel on that stop and resumed in 29th. He picked up two positions before the checkered flag.

The next event on the NASCAR Cup Series schedule is the Atlanta 400 on Sunday, July 11 at Atlanta Motor Speedway. The race starts at 3:30 p.m. EDT with live coverage on NBCSN and SiriusXM NASCAR Radio.