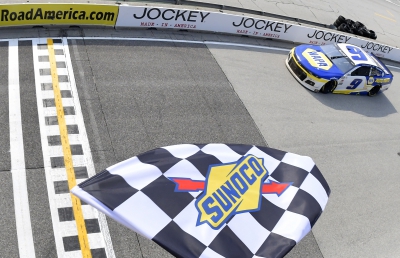 For the fourth of July, this year the Cup Series returned to Road America for the first time in 65 years. Another part of schedule changes for the “the best season ever” as NASCAR continues to include a wider variety of courses. Road America is a four-mile, 14 turn road course located in Elkhart Lake, Wisconsin; a vibrant racing community that is a staple of not only mid-west, but American racing.

The Jockey Made In America 250 had all the regular favorites such as Chase Elliot, winner of six road course races, but it also included a couple of the Xfinity regulars A.J. Allmendinger and Austin Cindric.

Pole sitter William Byron brought the field to the green flag, as drivers struggled with various problems as well as getting adjusted to the track. As with most road courses teams played strategy as much as possible starting with pit stops on lap 11. Byron would hold on to win the first stage.

Byron lead the field back to green as drivers continued to struggle including series veterans Denny Hamlin and Brad Keselowski. Unfortunately, for Cindric the road course ace lost a gear and exited the race after having ran in the top and leading a few laps. Underdog Matt DiBenedetto found his way to the lead for a few laps in stage two before surrendering to Kyle Busch who short pitted the stage end with a dozen other teams as the road course strategy continued.

Tyler Reddick would stay out for the stage win, the second of his career. After pit stops Busch would lead Elliot, and DiBenedetto to the start of stage three. In just a few laps DiBenedetto put his #21 Wood Brothers Ford in the lead and began to drive away. Unfortunately for the underdog, the odds favorite Elliot would take the lead with 24 laps to go.

A caution with 20 laps to go gave a couple teams the opportunity to play strategy for a win, but it could not beat the speed of the Hendrick Motorsports #9 Chevrolet. Elliot’s teammates ran into some trouble with only a handful of laps remaining as Alex Bowman lost his breaks and collected Kyle Larson.

Fortunately for Elliot the race would stay green and he would hold on to the lead to win his second race of the year and seventh career road course victory, putting him third on the all-time list behind Jeff Gordon and Tony Stewart.

With only six races left in the regular season the Cup series travels to Atlanta Motor Speedway next week for the Quaker State 400 presented by Walmart on July 11th at 3:30PM ET.