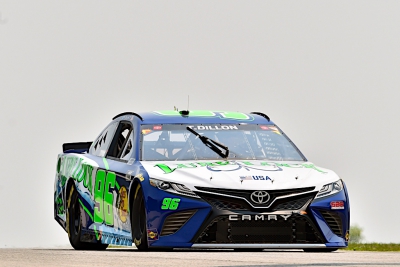 ●  The No. 96 Lure Lock/Bass Pro Shops Toyota Camry lined up 39th after too many caution periods during qualifying thwarted Gaunt Brothers Racing’s ability to set a lap time. Dillon was one of seven drivers in this predicament.

●  Nonetheless, Dillon entered the race optimistic. “We ran some laps (in qualifying) and none of them counted, so that’s frustrating. I think we were 400 feet from the start/finish line and the caution came out. We definitely improved from practice and I think we picked up quite a bit. We still need some more to go. We’re just going to have to run a smart, methodical race and hope people make mistakes.”

●  During a caution on lap three, Dillon said he was managing his brakes early on so that he didn’t “overcook them.”

●  Dillon spun in the kink on lap 11, but didn’t hit anything. “Just getting tighter and tighter and didn’t hit my mark there in the kink,” said Dillon shortly after bringing his Lure Lock/Bass Pro Shops Toyota to pit road for four tires and fuel.

●  The stage ended under caution and Dillon was 37th. He stayed out since he pitted on lap 12.

●  Despite the advantageous track position, the No. 96 Lure Lock/Bass Pro Shops Toyota Camry couldn’t hold off the cars behind it. By lap 23, Dillon was 30th.

●  “Still too tight,” said Dillon near the end of the stage.

●  The tight handling condition on the No. 96 Lure Lock/Bass Pro Shops Toyota Camry persisted, making it hard for Dillon to maintain track position. By lap 35, Dillon was 25th.

●  The Lure Lock/Bass Pro Shops Toyota sustained some left-rear damage on lap 38 when the No. 47 car of Ricky Stenhouse Jr., made contact.

●  “The kink and through the Carousel is where I’m getting beat the most,” said Dillon while under caution on lap 43.

●  Dillon took advantage of the caution and pitted for four tires and fuel on lap 44.

●  Picked off three positions in the final laps to finish 26th.

●  Chase Elliott won the inaugural Jockey Made in America 250 to score his 13th career NASCAR Cup Series victory and his second of the season. His margin over second-place Christopher Bell was 5.705 seconds.

●  There were four caution periods for a total of nine laps.

●  Thirty-four of the 40 drivers in the Jockey Made in America 250 finished on the lead lap.

“We had a long way to go from practice and qualifying to get into a good speed zone. We improved and improved. P26 is a good run for what we had in front of us today. We would’ve liked to get more out of it, but I’m pretty proud of the effort. I had a little mess up earlier in the race, but to come back and to get a good finish for this Lure Lock/Bass Pro Shops Camry is a good day.”

The next event on the NASCAR Cup Series schedule is the Atlanta 400 on Sunday, July 11 at Atlanta Motor Speedway. The race starts at 3:30 p.m. EDT with live coverage on NBCSN and SiriusXM NASCAR Radio.