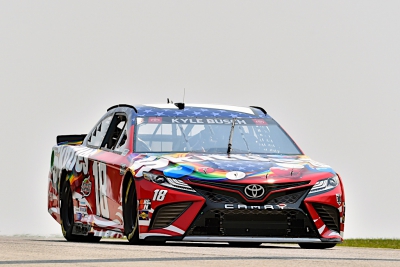 ● The Skittles America Mix driver started at the rear of the field after an accident in Saturday’s practice necessitated a backup car.

● Not surprisingly, Busch did not stay at the back for long, as he had worked his way up to 25th when the first caution of the race waved on lap three.

● Busch moved up into the top-20 by lap six, as crew chief Ben Beshore called the America Mix Camry to pit road for four tires and fuel. The caution waved while Busch was on pit road, so once the stage ended, Busch cycled back into the top-five for the ensuing restart.

● Busch started the stage in fourth and advanced to take the lead on lap 24.

● The two-time Cup Series champion came to pit road on lap 26 to take on four tires, fuel and adjustments, as the pit strategy set Busch up to cycle to the lead to start the final stage.

● Busch started the final stage in the lead but lost it to Matt DiBenedetto on lap 33. Eventually, Chase Elliott also got past Busch. But the Skittles America Mix driver got back to second behind Elliott until the caution waved on lap 43.

● The Las Vegas native came to pit road on lap 44 to get four fresh tires and fuel. A strong pit stop by the No. 18 team helped them vault ahead of Elliott on the restart and assume the lead.

● However, one lap into the green-flag run, Elliott was able to sneak past Busch to regain the lead.

● Busch pushed hard over the course of the final 17 green-flag laps, but he lost pace to Elliott, and eventually Busch’s JGR teammate Christopher Bell snuck past him for second. Still, it was a solid weekend for Busch and the Skittles America Mix team as they overcome plenty of hurdles throughout the weekend.

“We kept working on it, making adjustments there. We just did not have the tire life the 9 (Chase Elliott) did. That was incredible. He was able to drive away from us. His braking was really good, but his drive off was awesome. They beat us by far today, but proud of the Skittles America Mix bunch. Everybody on this Joe Gibbs Racing Toyota Camry did a good job. We all ran up front. We all had good speed. It showed that we were close. That was all we had, but overall good day fighting through traffic. It was really uneventful because we jumped the stages, so that kind of gave us that track position there at the end. We didn’t get very many points today doing that, but I feel like we are in a good spot. Hopefully, we will go get them next week.”