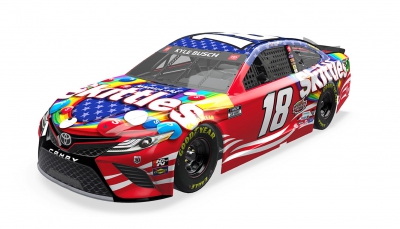 Like many Americans this Fourth of July weekend, Kyle Busch will be hitting the road. However, Busch, driver of the No. 18 Skittles America Mix Toyota Camry for Joe Gibbs Racing (JGR), will be doing it much faster than most, and he won’t be on vacation for the holiday weekend.

The two-time NASCAR Cup Series champion is set to take on a new challenge as the NASCAR Cup Series makes its debut at the 4.048-mile, 14-turn  Road America circuit in Elkhart Lake, Wisconsin, for Sunday’s Jockey Made in America 250.

While Busch has become one of the veterans of NASCAR’s top series with 59 career wins in what is now his 17th season as a fulltime competitor, the 36-year-old will become a rookie, of sorts, as many of the newer Cup Series competitors have raced several times at Road America with NASCAR’s Xfinity Series, which has competed there 11 times prior to this year’s Cup Series debut at the historic road course.

Still, Busch made a strong debut in May at another new road-racing venue, Circuit of Americas (COTA) in Austin, Texas. Busch led 12 laps and had a chance for a win had rain not forced the event to be cut short. The Las Vegas native led laps and finished fifth four weekends ago at Sonoma (Calif.) Raceway. This weekend, he hopes to make it to victory lane at yet another new venue and the fourth road course the series will have competed on so far this season.

Road-course racing has taken on even more importance in the Cup Series this year with the addition of COTA, Road America, and the road courses at Daytona (Fla.) International Speedway and the Indianapolis Motor Speedway added to the traditional stops at Sonoma, Watkins Glen (N.Y.) International and the Charlotte (N.C.) Motor Speedway Roval. With those additions, it’s more important than ever to have a strong driver and team that can turn left and right this season and beyond.

Busch heads to his Road America debut this weekend on a hot streak, of sorts, as he became the most recent Cup Series winner at the second race of last weekend’s doubleheader at Pocono (Pa.) Raceway. Busch finished just one spot short of a win on Saturday, but while he had a strong car on Sunday, he used a fuel-mileage gamble to bring home a win as the team also fought through transmission issues, which put him behind during several points of Sunday’s winning effort. Still, Busch added to his impressive resume by passing Kevin Harvick for ninth on the all-time Cup Series win list, with potentially many years left in the tank.

To help America’s Independence Day celebration this weekend, Busch’s No. 18 Toyota will feature the Skittles America Mix scheme.Each bag of Skittles America Mix contains a fun, fruit-flavored and patriotic mix of red, white and blue candies. The patriotic-themed Skittles are a must-have for celebrating this weekend – and of course, a great snack while watching a NASCAR Cup Series race. They’re available at retailers nationwide through the summer.

So as Busch heads to Road America for the first time this weekend, as virtually a rookie there, he’ll hope to hit the road not for a vacation weekend, but to get to work and learn an entire new road course in hopes of continuing to add to his impressive career statistics.