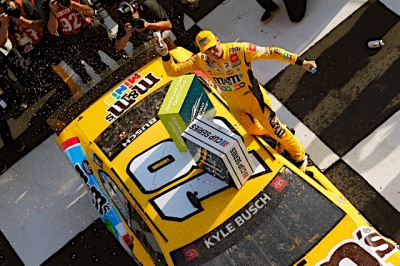 After winning the second race of a two-day double-header at Pocono Raceway on Sunday, Kyle Busch had some opinions regarding the double-header event and visiting some tracks twice.

“Doubleheaders? My personal opinion with as much as the schedule has kind of changed over the last couple years, what all has been going on with different racetracks and such, fans’ reception to coming and supporting some of those racetracks, we don’t need to go to any racetrack more than once,” said Busch after the race in the media center regarding the double-header event.

Kyle’s opinion is that NASCAR should spread the wealth across many tracks around the nation instead of visiting some tracks twice a year.

“You know what I mean? Spread the wealth. That’s my opinion.”

This season has featured the most change to the NASCAR Cup Series schedule since probably the early 2000s with Nashville, Circuit of The Americas, an additional Atlanta stop, and the addition of Road America. While these tracks were added, some notable tracks did not make the schedule in 2021, notably Chicagoland Speedway and Kentucky Speedway.

Busch loved the addition of Nashville while questioning why Chicagoland and Kentucky Speedway were left off while Atlanta gained a second date.

The circuit features some tracks twice but hold a different type of event such as Bristol Motor Speedway in the spring and Charlotte Motor Speedway in October. For the first time this past March for NASCAR, Bristol covered their 0.533-mile high-banked concrete oval with dirt. For the last few seasons, Charlotte has converted their 1.5-mile oval into a “Roval” road course.

Busch is correct. And honestly, if the series wants to visit a certain track twice, at least put on a different type of event for one of those. These are the things NASCAR should focus on the most if they plan on visiting tracks twice. Another significant thing that NASCAR is looking / should look into is street course racing.

Pairing with the IndyCar Series, owned by NASCAR team owner Roger Penske, will help further guide the sanctioning body to a street course or two should NASCAR decide to go in that direction.

The cup series veteran and winner of 220 NASCAR National Series events later re-emphasized that the series should only make one visit at each track to spread the wealth and offerings to fans.

“We should go to every place once, find a couple more places we can go to and spread the wealth.”