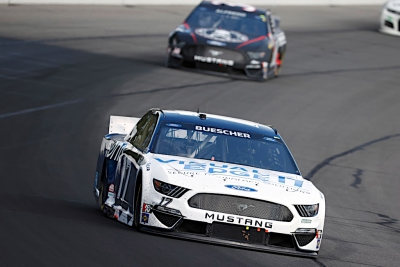 After leading the field to green in Sunday’s second race of the NASCAR Cup Series doubleheader, Chris Buescher finished 19th in the Acronis Ford at Pocono Raceway.

Buescher earned the pole position after finishing 20th in Saturday’s first race, with NASCAR inverting the top-20 by finishing position. After a quick yellow on lap two, Buescher restarted in first on lap six, but a few laps later lost all his track position with a big push from behind. The push sent him high into the corner, and put him 15th when the sequence sorted out.

He went on to finish the opening 30-lap stage in 13th as the team began work on tightening up his No. 17 Ford. The Prosper, Texas, native began the second segment in 15th, a 55-lap stage that ran caution-free. He brought the Acronis machine to pit road under green at lap 73 for service, and would finish it in 24th.

Fuel mileage came into play late as teams stretched their strategy in the closing laps. Buescher restarted inside the top-10 at lap 96, but ultimately had to pit for fuel late which led to the 19th-place result.

NASCAR heads to Wisconsin next for a road course race at Road America. Next Sunday’s race is set for 2:30 p.m. ET on NBC and MRN, and can also be heard on SiriusXM Channel 90.