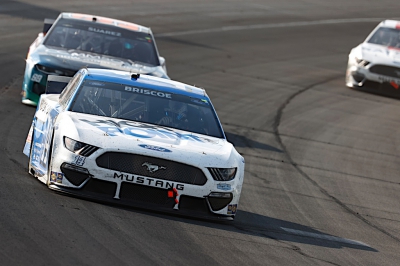 ● The first caution of the race occurred on lap three with Briscoe, running 17th, reporting he wasn’t able to get a good read on his handling since he was mired toward the back of the field. He stayed on track to restart in the 21st position on lap seven and was just outside of the top-15 when his HighPoint.com/Webex by Cisco Ford tightened up in turn three.

● The race stayed green until the completion of the first stage, when Briscoe visited pit road at the break for tires, fuel and adjustments. A slow stop to allow the team to make an additional adjustment, however, had Briscoe lined up 32nd for the beginning of Stage 2.

● The HighPoint.com/Webex by Cisco driver quickly moved forward after starting 32nd and was scored in the 25th position on lap 45 when he radioed that the No. 14 was still too tight center to exit of turn three.

● He continued to advance and updated the team again on lap 54 to say that his handling was improving as he rode in the 22nd position.

● The No. 14 team gave up the 15th position to make a scheduled green-flag pit stop on lap 73. Briscoe said he was now too tight in turns one and three, so the HighPoint.com/Webex by Cisco crew gave him four tires, fuel and air pressure and chassis adjustments.

● Briscoe rejoined the field in 29th and gained two spots before the conclusion of the second stage.

● Briscoe gained seven spots on the initial green flag of the final stage and was running 16th when the yellow was shown on lap 93. The team took advantage of the chance to pit for fuel only, and the No. 14 restarted 18th on lap 96.

● The HighPoint.com/Webex by Cisco team gradually moved forward as their competitors made green-flag pit stops for fuel to make it to the end of the race.

● Briscoe advanced as far as ninth by lap 119 until fuel-saving measures caused him to fall back in the field to 21st, where he ended up finishing the 140-lap race.

● Denny Hamlin remains the championship leader after Pocono with a two-point advantage over second-place Larson.

Chase Briscoe, driver of the No. 14 HighPoint.com/Webex by Cisco Ford Mustang for Stewart-Haas Racing:

“The front end of car was just way too tight at the beginning. We finally got it to where the balance was pretty good and it seemed like our pit strategy was going well, but we were just a little too short on fuel to run hard at the end. I’m really excited to go to Road America. It’s one of my favorite tracks, so hopefully we’ll be able to put on a show there and come out with a good finish.”