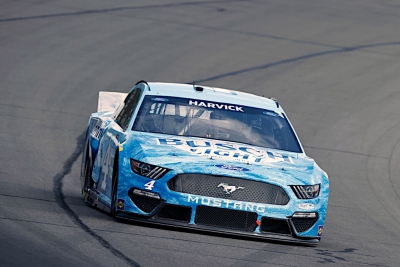 ● The No. 4 Busch Light Ford Mustang dropped a pair of positions in the short run to the first caution flag of the day on lap three for a car contacting the turn-two wall. Harvick restarted in 13th on lap six and picked up a pair of positions by stage’s end. He reported the front tires were chattering while running 12th on lap eight, and said at the end of the stage said his racecar was extremely tight from corner center to exit. He pitted for four tires and a track-bar adjustment during the break.

● The No. 4 Busch Light Ford Mustang made steady forward progress from the outset of the stage with Harvick cracking the top-10 on lap 47. He said his handling was improved, particularly in clean air, but that he needed help sticking to the racetrack in traffic.

● Harvick reported a “huge vibration all of a sudden” on lap 66 while running 10th and nearing the team’s planned, green-flag stop. He pitted early for fresh tires and a quick inspection, and resumed in 26th place. He reported shortly after the pit stop that he could still feel the vibration.

● The vibration did not pose any problems the rest of the stage, during which Harvick picked up 11 positions. He said the front-end issues he’d been experiencing created rear-grip issues and his ability to pass cars. He pitted during the break for four tires, fuel and track-bar and front-end air-pressure adjustments.

● The No. 4 Busch Light Ford Mustang enjoyed a solid restart, picking up seven positions to 11th before the caution flag flew on lap 92 for debris. Harvick stayed on track and restarted seventh on lap 96.

● It was another strong restart for Harvick as he was able to navigate his way to second by lap 98 tucked in behind leader Alex Bowman.

● Harvick continued to hold down second place until he was called to the pits for his final planned fuel stop on lap 112. He rejoined the race in 17th with 28 laps remaining as the majority of cars ahead of him employed different fuel strategies.

● As cars ahead of him began filing down pit road for their last splashes of fuel in the final laps, Harvick picked up 13 positions by the time he took the checkered flag.

● Harvick earned his sixth top-five and 14th top-10 of the season.

● This was Harvick’s fifth straight top-10 at Pocono.

● This was Harvick’s third straight top-10. He finished fifth last Sunday at Nashville (Tenn.) Superspeedway and eighth yesterday in the Pocono Organics CBD 325.

● Denny Hamlin remains the championship leader after Pocono with a four-point advantage over second-place Kyle Larson.

“We struggled with the car at the beginning of the race with the handling – just way too tight and also fighting loose in. Rodney (Childers, crew chief) and everybody on pit road did a really good job. Our car is just really sensitive in traffic and I lose a little bit more time in traffic than I’d like to and it just takes me longer to get by. But I’d like to thank everybody on our Busch Light Ford Mustang. I want to welcome Unibet on the car for the first week – Hunt Brothers, Jimmy John’s, Mobil 1, everybody from Haas Automation that helps this car, we just keep plowing along.”

The next event on the NASCAR Cup Series schedule is the Jockey Made in America 250 July 4 at Road America in Elkhart Lake, Wisconsin. The race starts at 2:30 p.m. EDT with live coverage provided by NBC and SiriusXM NASCAR Radio.