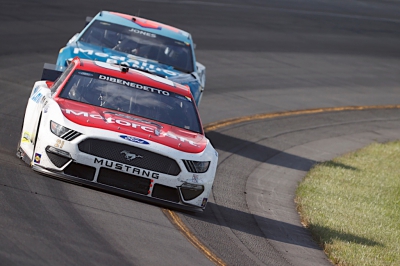 Matt DiBenedetto and the Motorcraft/Quick Lane team finished 18th in the second half of a Cup Series double-header at Pocono Raceway.

DiBenedetto official starting position was 32nd for the Explore The Pocono Mountains 350 as the line-up was set based on the finishing order of Saturday’s opener at Pocono.

After three laps on Sunday he was up eight spots, passing some and moving ahead of others who had to go to the rear due to a switch to back-up cars after crashes on Saturday.

He continued to gain positions and ended the first Stage in 19th place. In the second Stage he ran as high as 15th at times but ended that segment in 21st place.

DiBenedetto ran as high as 10th in the early portions of the third and final stage, but Sunday’s 140-lap, like many others at Pocono, boiled down to a fuel-milage race.

The Motorcraft/Quick Lane team made its final stop with 38 laps remaining and rejoined the race in 25th place. DiBenedetto, with plenty of fuel to make it to the checkered flag, moved up seven spots in the closing laps to finish 18th.

“We definitely didn’t get the finish we wanted,” he said. “But our hands were kind of tied due to the track position we had to start with.

“That tied down our strategy and held us back.”

He said that performance-wise, the Motorcraft/Quick Lane Mustang was better than it might have seemed.

“We definitely had better than an 18th-place car,” he said. “It was really, really difficult to pass because of the aero package. We just wanted to finish the race clean and not do anything that would make a bad situation worse.

“We’ll move on and keep working to be faster.”

DiBenedetto and the Wood Brothers team now head to Road America for a Fourth of July run on the famed road course in Elkhart Lake, Wisc.