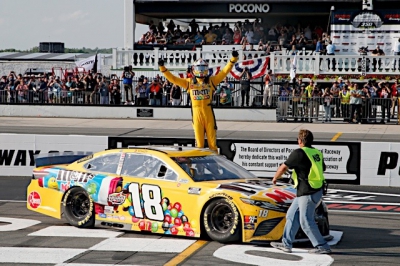 Kyle Busch persevered on Sunday to win the Explore the Pocono Mountains 350 at Pocono Raceway on Sunday. Busch, battling a transmission issue with his No. 18 M&M’s Mini’s Toyota, took the lead when several leaders ran out of fuel in the closing laps.

Busch took the lead from teammate Denny Hamlin with two laps remaining to score his second victory of the year. The driver from Las Vegas now has four victories at the “Tricky Triangle” in Pennsylvania.

“Yeah, stuck in fourth gear. About out of gas (laughter),” said Busch after the race. “Just saving, just riding, playing the strategy the best we could with what was given to us. It was awesome today.”

Busch goes into the inaugural event at Road America with eight top five and 12 top 10 finishes in 2021.

“You know, I don’t know. You don’t know, you know? The biggest thing was trying to time the restart right,” Busch continued. “Leave pit road, come back around, be at full speed by the time the field takes the start/finish line. We were a little bit off on that. We were from here to pit road off on that. That’s about all we could do. That’s all you could think about doing in that situation, just thinking through any opportunity and obstacle that’s on you. That’s just what we did. Again, great job to my team. Thanks to Ben Beshore. Thanks to Matt the fuel guy for getting it full. That’s a big important one today. Really great to take home another checkered flag.”

Looking to score his fifth victory of the year in the Cup Series, Kyle Larson finished 8.654 seconds behind race winner Kyle Busch.

Keselowski, finishing third, led the most laps of the 350-mile event of 31. Keselowski said after the race that they just didn’t have the fuel to land in victory lane.

“We ran a really good race but just didn’t have enough fuel to make it to the end like those other guys did,” said Keselowski. “They beat us on power and fuel mileage. We have a lot of work to do to keep up with those guys.”

Kevin Harvick and Bubba Wallace rounded out the top five.

Caution slowed the field twice for incidents involving Anthony Alfredo on the third lap of the race and debris from the 43 of Erik Jones on lap 94. The two additional yellows marked the end of the two scheduled stages at laps 35 and 90.

The series will shift focus to Road America for the Jockey Made in America 250 on Sunday. Coverage of the event will take place at 2:30 p.m. ET. live on NBC, MRN Radio and SiriusXM NASCAR Ch. 90.