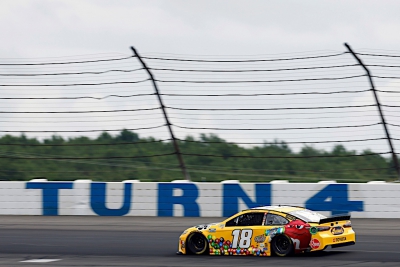 ● Caution waved on lap nine for debris with Busch in fourth place. He reported that the No. 18 M&M’S Minis Toyota was “really good,” with good stability.

● Busch restarted in fourth place and quickly took over third.

● Caution waved on lap 14 for a single-car accident. Busch made a trip to pit road for four tires and fuel. He lined up third for the restart on lap 18.

● The M&M’S Minis driver took the lead for the first time on lap 19. He maintained the top spot to the conclusion of the first stage to pick up the stage win.

● The team made a pit stop during the caution for four tires and fuel. A number of teams exercised different strategies and stayed out during the stage break. This resulted in Busch lining up 15th to start the next stage.

● Busch quietly went to work, logging laps and patiently picking up positions. He was in ninth place on lap 46 when a number of teams that had yet to pit from the previous stage started making trips to pit road.

● The Las Vegas native was still in ninth place on lap 53 when caution was displayed. He reported that the M&M’S Minis Toyota started out a little too loose but slowly shifted to being too tight at the center of the turns through to the exits.

● A number of teams elected to pit during the caution. The No. 18 team elected to stay out, placing Busch in first place for the restart on lap 57.

● Busch maintained the top spot through the next handful of laps. The race was slowed by caution during that stretch. It was during the caution on lap 71 that the team elected to make a stop for four tires and fuel. Busch lined up 15th for the restart on lap 75 and raced back within the top-10 by the time Stage 2 concluded.

● The two-time NASCAR Cup champion settled in and went to work.

● Teams that did not stop between the second and final stages started making trips to pit road for service on lap 90. Busch started to climb up in the running order and was second by lap 94.

● The M&M’S Minis driver made his own trip to pit road on lap 97 for two tires and fuel. He returned to the track scored in 10th place.

● Caution slowed the race on lap 109 with Busch in fourth place. The three cars in front of him had yet to make trips to pit road for service. Once they all stopped, Busch was back in the lead.

● Green-flag racing resumed on lap 111 with Busch out front. He battled driver Kyle Larson for the lead and eventually settled in second place.

● Busch remained a fixture at the front of the field to the conclusion of the race, finishing in second place.

“It was just impossible to pass today. We were a tick – just a little bit – slower than (Kyle) Larson, and we were able to hold him off. The 48 (Alex Bowman) held him off forever, and finally the 5 (Kyle Larson) got by and got away by 20 lengths or so. I was just dying tight behind those guys. I just could not do anything in traffic. We don’t have what we need to slice through traffic. Everybody’s hindered, but it seems to affect us a little bit more. Everybody on this M&M’S Minis Toyota Camry team did a good job. We made some good calls and had a fast car from the start – a good handling racecar. It felt good. We made small adjustments to it all day long, and that’s all we had to run with those Hendrick cars again. Still, we were best in class. Thanks to Rowdy Energy, Stanley, Interstate Batteries and Rheem. We will go get them again tomorrow.”

The second event of the NASCAR Cup Series doubleheader at Pocono is the Explore the Pocono Mountains 350 on Sunday. The race starts at 3:30 p.m. EDT with live coverage provided by NBCSN and SiriusXM NASCAR Radio.