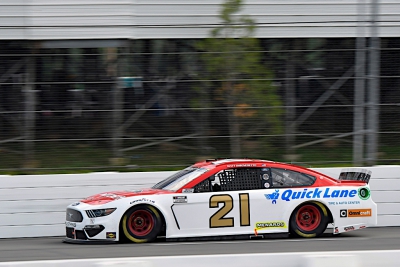 The best-laid Pocono plans for Matt DiBenedetto and the Motorcraft/Quick Lane team unraveled due to a couple of mistakes on the team’s final pit stop.

In the latter portion of the opening race of a double-header at Pocono Raceway, crew chief Jonathan Hassler and the team were working a strategy that called for DiBenedetto to make a fuel-only stop with 39 laps remaining. That should have delivered DiBenedetto a badly-needed jump in track position as the laps wound down, but the team was hit with a penalty when the gas can was drug into an adjoining pit stall.

DiBenedetto then had to serve a pass-through-pit-road penalty, but was nabbed for speeding as he served the penalty. That led to another costly pass-through.

The lost time dropped him off the lead lap, and while he was able to gain three positions in the final circuits, he ended the Pocono Organics CBD325 in 32nd place, the first driver one lap down. He dropped one spot in the Cup Series standings, to 20th.

Before the late race issues, DiBenedetto and the Motorcraft/Quick Lane team were making some progress at a place where track position is hard to come by. He started 21st and moved up to 15th in the first four laps. He was running 18th at the end of the first Stage and second Stages, but a big jump in the running order eluded him.

“We started the race buried in track position, and that makes it rough at a place where track position is so hard to come by,” DiBenedetto said. “We were able to move up some with strategy, but we needed some luck and a few changes to the car.”

He said the miscue involving the fuel can on the final pit stop was due to a communications error that can be easily corrected.

“It was just a little mishap, nothing to point fingers over,” he said. “But it did ruin a shot at an OK day for the Motorcraft/Quick Lane Mustang.”

DiBenedetto’s finish on Saturday sets up a 32nd-place start for Sunday’s Explore The Pocono Mountains 350 and another challenge to overcome poor track position.

“We’ll do all we can to try to get things turned around soon,” he said.

Rate this item
(0 votes)
Tweet
« Almirola 16th at Pocono 1 Buescher Battles to 20th-place Finish in First Half of Pocono Doubleheader; Set to Start on Pole on Sunday »