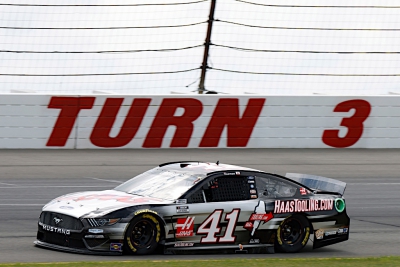 ● Prior to the green flag, Custer had to drop to the rear of the field due to prerace inspection issues. Therefore, he started the Pocono Organics CBD 325 in 38th.

● By lap two, the No. 41 HaasTooling.com Ford had passed eight cars to make it up to 30th.

● When the caution flag came out on lap nine, NASCAR made the decision to make that the competition caution. Custer was running 26th. In an attempt to gain spots using strategy, the No. 41 HaasTooling.com team opted to keep their driver out on the track during the caution so they would restart the race 15th.

● On the lap-13 restart, Custer was moving forward when the No. 2 Ford of Brad Keselowski made contact with the back of the No. 41 Ford Mustang and forced the car into the wall.

● The damage was too much to continue, and the Ladera Ranch, California, native finished the day in 38th.

“Yeah, these restarts. You’re trying to get up in those tight holes to make sure you don’t get freight trained by five cars on the straightaway. I don’t know. I haven’t seen a replay. I don’t know if it was just too tight or miscommunication or what. I really wanted a good day today. I thought we had a good car those first few laps with our HaasTooling.com Mustang, but we’ll just move on to tomorrow. It’s frustrating. I can’t tell you how frustrating this year has been. We’ll just have to keep surging on and go to tomorrow.”

The second event of this weekend’s NASCAR Cup Series doubleheader at Pocono is the Pocono Mountains 350 on Sunday. The race starts at 3:30 p.m. EDT with live coverage provided by NBCSN and SiriusXM NASCAR Radio.