Harvick Eighth in First Round of Pocono Doubleheader 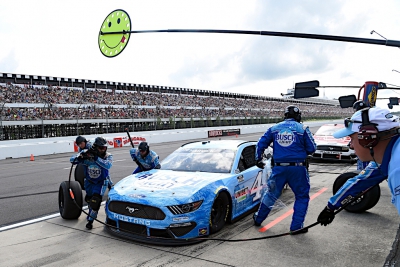 ●  After the competition caution came out on lap 10, Harvick said his No. 4 Busch Light Ford Mustang was a little loose.

●  When the yellow caution flag waved again on lap 15, Harvick was fourth.

●  Held steady in fifth to finish the stage.

●  Pitted for four tires and fuel with tire pressure adjustments at the conclusion of the stage. Also removed some tape from grille.

●  Varying pit strategies jumbled the running order, with some drivers opting to stay out or pit for only two tires.

●  Caution on lap 54 allowed Harvick to pit for four tires and fuel on lap 55. Pulled some more tape from grille.

●  Harvick took advantage of caution and pitted on lap 74 for four tires and fuel. Pulled more tape off the grille.

●  Since Harvick pitted earlier, crew chief Rodney Childers kept him out on the racetrack upon the conclusion of the stage.

●  Harvick made a scheduled, green flag pit stop on lap 90 for fuel and a right-rear wedge adjustment. No tires.

●  “Too tight in (turns) one and two, center out, but the back (of the car) wants to snap loose in (turn) one, so I’ve got two things going on,” said Harvick during a caution period on lap 109. He remained 11th.

●  Passed Tyler Reddick for ninth on lap 123 and picked up eighth on the final lap when race leader Kyle Larson cut a tire, allowing Harvick to get past him just before the finish line.

●  Harvick’s 21 top-10s at Pocono are tied with Denny Hamlin and Kurt Busch for the most among active NASCAR Cup Series drivers.

●  This was Harvick’s fourth straight top-10 at Pocono.

●  This was Harvick’s second straight top-10. He finished fifth in the series’ last race at Nashville (Tenn.) Superspeedway.

●  Alex Bowman won the Pocono Organics CBD 325 to score his fifth career NASCAR Cup Series victory, his third of the season and his first at Pocono. His margin over second-place Kyle Busch was .683 of a second.

●  There were eight caution periods for a total of 25 laps.

●  Thirty-one of the 38 drivers in the Pocono Organics CBD 325 finished on the lead lap.

●  Hamlin remains the championship leader after Pocono with an eight-point advantage over second-place Larson.

“Our Busch Light Ford Mustang was really good at the end. It just took us all day to kind of get the track position and get the loose into the center of the corner better. It took all day, but then we were able to get an OK finish out of it.”

The second event of the NASCAR Cup Series doubleheader at Pocono is the Pocono Mountains 350 on Sunday, June 27. The race starts at 3:30 p.m. EDT with live coverage provided by NBCSN and SiriusXM NASCAR Radio.