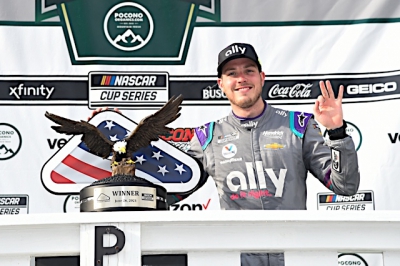 The Pocono Organics CBD 325 at Pocono Raceway on Saturday didn’t disappoint as Alex Bowman and Kyle Larson battled for the win late. Larson, chasing his fifth cup series victory of the year and looking to win four in a row, came short when the left front on his No. 5 Chevrolet went down after taking the white flag as the leader.

“Yeah, I hate to win one that way, but hell; yeah, I’ll take it,” said Bowman. “Man, we kind of gave the lead away. We were on two tires and just got super tight. I tried to hold him off as long as I could.”

The tire going down allowed Larson’s teammate Alex Bowman to take the lead and sail to his third win of the year. The No. 48 Chevrolet led the field for 16 circuits while Larson led 15. Bowman apologized to his crew before misfortune struck the No. 5 team.

“Yeah, I don’t know what to think about that,” said Bowman. “‘Bad Luck Bowman’ had some luck there. I mean, the No. 5 beat us. Their misfortune, it happens. That’s part of the sport. I’ll take it.”

Bowman will go into the second race at Pocono, scheduled for Sunday afternoon, with five top five and nine top 10 finishes.

Kyle Busch, sitting 0.683 seconds behind Bowman at the checkered flag, led the most laps of the 325-mile event of 30. The driver from Las Vegas won stage one and finished ninth at the end of stage two.

Denny Hamlin and Ryan Blaney rounded out the top five.

The field slowed eight times for the caution flag throughout the day while nine drivers led laps with 14 different different leaders throughout the first of two races at Pocono this weekend.

The cup series will race following the NASCAR XFINITY Series event on Sunday afternoon at 3:30 p.m. ET. on NBCSN. The Explore the Pocono Mountains 350 will also air live on MRN Radio and SiriusXM NASCAR Ch. 90.