DiBenedetto Ready for Two Tries at the Tricky Triangle 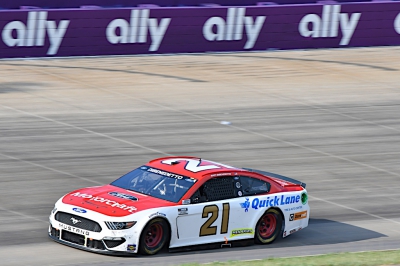 Having a fast Mustang in Music City, Matt DiBenedetto and the Motorcraft/Quick Lane team are headed to the Tricky Triangle feeling a little optimistic.

Pocono Raceway, the three-turn, 2.5-mile track, is hosting a double-header for the Cup Series with the Pocono Organics CBD 325 on Saturday and the Explore The Pocono Mountains 350 on Sunday.

DiBenedetto, who finished 13th and sixth in the two Pocono races last year, said he believes he and the Motorcraft/Quick Lane team are capable of backing up – or even bettering – their performances of a year ago.

“We had a fast car at Pocono last year, so hopefully that same speed carries over,” he said, adding that speed isn’t the only factor to be considered this weekend. “Track position is everything with the high-downforce package.”

Track position could be a challenge, at least initially for the Motorcraft/Quick Lane team. DiBenedetto and the No. 21 Mustang are set to start Saturday’s opener from 21st place. The line-up was set based on recent results, and DiBenedetto wound up 24th in the most recent race, at Nashville Superspeedway.

DiBenedetto also said the chemistry between him and his new crew chief is beginning to build.

“I’ve really enjoying working with Jonathan Hassler,” he said. “Although we had electrical issues last weekend, we had a good car and great communication, so we are looking forward to these upcoming races.”

NBCSN will carry the telecast of both races.