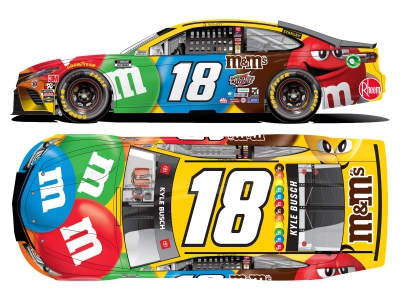 As the NASCAR Cup Series heads to Pocono (Pa.) Raceway this weekend, NASCAR’s top series will be seeing double as it heads to the 2.5-mile triangle in the Pocono Mountains.

For many years, the two annual NASCAR Cup Series races at Pocono (Pa.) Raceway had been runs five to six weeks apart. The tight window in which they’d traditionally been run didn’t give much time between trips to the Pocono Mountains for teams to make drastic changes to their cars.

But when the Cup Series makes this year’s trek to the Poconos, the window of time between Saturday’s Pocono 325 and Sunday’s Explore the Pocono Mountains 350 is less than 24 hours for the second year in a row after last year’s successful doubleheader weekend debut.

The rules require NASCAR Cup Series teams to use the same car in both events, but they’ll be allowed to work on them between races. Following the finish of Saturday’s 130-lap race, the starting lineup for Sunday’s 140-lap event will be set by inverting Saturday’s top-20 finishers, and those finishing 21st through 38th on Saturday starting from those same positions Sunday.

Kyle Busch, driver of the No. 18 M&M’S Minis Toyota for Joe Gibbs Racing (JGR), knows he’s fortunate enough to be able to race, and win, for 17 seasons and counting in NASCAR’s top series. Not only has he won 58 races and two Cup Series championships, he’s had his fair share of recent success at the track nicknamed the “Tricky Triangle.” The Las Vegas native won the June 2019 Pocono race and has three wins in his last seven Cup Series starts there.

For the first time ever, a timeless M&M’S favorite – M&M’S Minis – with adorn Busch’s No, 18 Toyota this weekend. M&M’S Minis are a great way to share the delicious, colorful fun of M&M’S with friends and family. M&M’S Minis are perfect to include in baked treats for the same M&M’S taste, mini style.

Busch’s recent fortunes at Pocono began after he narrowly missed a victory in June 2017. He returned for that year’s July race looking for his first Pocono Cup Series win, and he was able to deliver behind some clever strategy as well as his own smart driving. While the top competitors headed to pit road for their final scheduled fuel-and-tire stops late in the race, Busch stayed out longer than the rest. The others were clearly faster on newer tires, but Busch took advantage of a clean track to make up time and, when he was finally called to pit road, he had much fresher tires than his fellow competitors for the closing stages of the race. He eventually drove by Kevin Harvick for his impressive maiden Pocono victory. Since then, Busch has been able to grab Pocono wins in 2018 and 2019 to add to his growing resume at the Tricky Triangle.

So, as the series heads back to the Pocono Mountains, Busch, crew chief Ben Beshore and the entire team will focus on not one but two races with their M&M’S Minis Toyota, hoping to take it a giant step further with a chance to win twice during this weekend’s doubleheader.