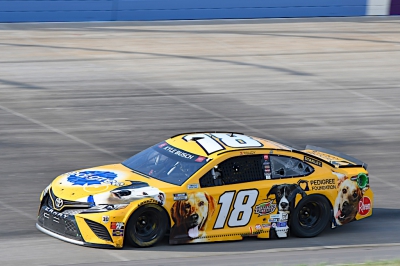 ● The driver of the PEDIGREE® Foundation Toyota Camry started second but jumped to the top spot as the field completed the first lap.

● Caution was displayed for a single-car accident on lap one. Busch restarted first on lap five but fell back to second on lap six.

● Busch reported that the car’s handling was on the loose side getting into and exiting the turns and then tight in the center. He made a green-flag pit stop on lap 44 for four tires, fuel and a round of air pressure adjustments. While he was on pit road, the caution was displayed for a single-car incident. Busch exited pit road and was able to stay on the lead lap. Once NASCAR sorted the lineup, Busch was scored in first place.

● Green-flag racing resumed on lap 54. Busch battled but eventually dropped back a spot to second.

● The No. 18 PEDIGREE Foundation Toyota started to drop a few spots as the stage continued and was scored in sixth place when caution was displayed on lap 78.

● The team used the break to make major changes, adjusting the chassis and air pressures while changing four tires and adding fuel. Busch lined up ninth for the restart on lap 85.

● Busch raced back to the top-five to finish Stage 1 in fifth place.

● The team stayed out at the end of Stage 1, which placed Busch in second place for the restart.

● During the next several laps Busch reported that the loose-tight-loose handling condition that plagued the car in the turns continued to be a problem.

● Caution waved on lap 132 for a single-car accident. Busch was scored in sixth place.

● The two-time NASCAR Cup Series champion reported that the car continued to handle tight in the center of the turns and that it had no grip at the exits. The team changed four tires, added fuel and made another round of chassis and air pressure adjustments. Busch lined up third for the restart.

● Caution was displayed on lap 173 for yet another single-car incident. Busch was scored in fourth place.

● The team made a stop for four tires, fuel and some air pressure adjustments. Busch lined up fifth for the restart on lap 180 and maintained the position to the conclusion of the final stage.

● The handling on the PEDIGREE Foundation Toyota continued to be problematic in the final stage. Busch steadily lost positions and was ninth by the time caution waved on lap 196. The issue continued once green-flag racing resumed, and Busch really started to lose position.

● Caution was displayed on lap 217. Busch made a trip to pit road for tires, fuel and adjustments. During the caution the team discovered that the right-front tire had started to go flat, which was the likely cause of Busch’s dramatic drop through the field.

● Busch battled during the next several laps to try and make up track position, and the team continued to try a variety of adjustments.

● On lap 227, Busch reported the car’s handling had shifted to being very tight. Again, the team tried a variety of adjustments to help the handling situation.

● As the race continued Busch was able to move through the field and was back among the top-20 at lap 238. He continued those efforts to the conclusion, finishing the day in 11th place.

“Our qualifying result was way better than expected. I didn’t expect to qualify that well, based on what we learned in practice. We completely wholesaled everything and changed it all before qualifying, so we didn’t know what to expect with our PEDIGREE Camry. Obviously thought we would be better than 11th. We have work to do.”

The next event on the NASCAR Cup Series schedule is a doubleheader June 26-27 at Pocono (Pa.) Raceway. The Pocono 325 starts at 3 p.m. EDT on Saturday, and the Explore the Pocono Mountains 350 begins at 3:30 p.m. on Sunday. Live coverage of both will be provided by NBCSN and SiriusXM NASCAR Radio.