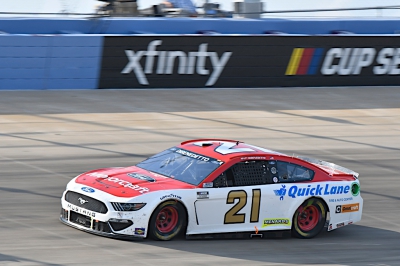 Matt DiBenedetto and the No. 21 Motorcraft/Quick Lane team had a top-10 run going in Sunday’s Ally 400 at Nashville Superspeedway only to experience a rare engine issue that led to a 24th-place finish.

DiBenedetto qualified 11th for the Cup Series’ first race at the 1.33-mile concrete Nashville Superspeedway, which was hosting the first Cup race in Music City since 1984.

Running before a sellout crowd, DiBenedetto immediately was on the march. He was up to seventh place after five laps and in the top five by Lap Eight.

He continued to run inside the top 10 for the entire first Stage and ended that 90-lap segment in 10th place, despite making a pit stop that dropped him to 12th place just prior to the end of the Stage.

When five drivers who finished the first Stage ahead of him made their pit stops, he moved up to fifth place for the ensuing restart. Then just as the second Stage got under way, the engine in the Motorcraft/Quick Lane Mustang developed a miss, and DiBenedetto began dropping back.

Despite being down on power, he remained on the lead lap for much of the remainder of the race and was able to run respectable speeds at times. With just over 50 laps left to go in the 300-lapper, he fell off the lead lap and crossed the finish line in 25th place. He moved up one spot in the finishing order, and gained one Stage point, when Chase Elliott was disqualified.

“We definitely had a car that was capable of finishing in the top 10,” DiBenedetto said. “It drove well. The crew had good stops, and [crew chief Jonathan] Hassler made good calls on the pit box.

“Everybody did a good job, but we had the engine issue.”

He said the team quickly changed spark plug wires and plug to no avail. “It must have been something internal,” he said.

DiBenedetto said that while his Motorcraft/Quick Lane Mustang was fast at Nashville there’s still a bit more work to be done.

“We are still missing a little bit of speed to be able to compete with the top cars,” he said. “But there are a lot of teams in the garage saying the same thing right now.

“We’ll just move on from [Nashville] and keep working hard.”