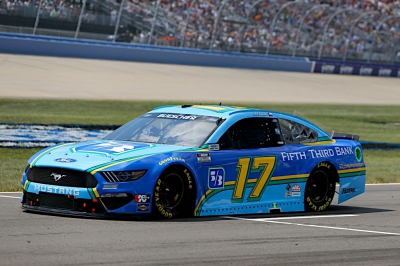 NASCAR’s first-ever Cup Series race at Nashville Superspeedway got off to a hot start for Chris Buescher, who was in the mix early and moving through the field in his Fifth Third Bank Ford Mustang. However, bad luck followed the No. 17 team and debris on the track cut a tire on the car, sending Buescher into the wall and ending his day early at the Tennessee track.

“The Fifth Third Bank Ford Mustang was really good today,” said Buescher. “It’s definitely unfortunate, there’s nothing we did wrong to cause the DNF. I’m proud of my team, we had a good weekend. We had a good practice and qualifying, and the race was going to be good for us as well.”

With traditional qualifying taking place Sunday morning, Buescher finished 17th on the speed charts and would begin the afternoon’s race there. With restarts going three-wide up and down the slick track, Buescher was able to quickly run through the middle of the pack and navigated to 12th place in just a handful of laps.

The first round of green flag pit stops would prove to be untimely for the team, as a caution flag came out just as Buescher was exiting the pits. He was scored 22nd, and one lap down to the leaders, but was able to get back on the lead lap with a wave around for the ensuing restart.

Buescher once again had a strong showing on the restart, recovering much of the lost track position and getting up to 13th by the time another caution flag flew just ten laps later.

The Fifth Third Bank Ford Mustang continued to be a strong performer, until lap 77 when a car in front of Buescher had a mechanical issue and debris from the car tore through the front of the No. 17. The debris caused an immediate cut tire that sent Buescher into the fence, and also damaged parts of the car’s interior that the team was unable to repair. Buescher was ultimately credited with a 37th-place finish.