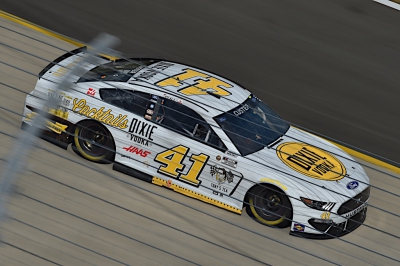 ● The No. 41 Dixie Vodka Tony’s Tea Ford quickly moved forward at the start of the race and was running fifth when the caution flag waved on the first lap of the race.

● From the lap-five restart, Custer held steady in fifth until his lap-44, green-flag pit stop for four tires, fuel and a slight adjustment.

● The caution flag flew while the team was on pit road and Custer was set to restart in the top-10. However, the No. 41 was hit with a pit road speeding penalty sending Custer to the tail end of the longest line on the lap-52 restart.

● The No. 41 driver came to pit road under the lap-78 caution while he was running 25th to get four tires, fuel and an adjustment. This put the team in a position to stay out and gain track position when the stage came to an end 12 laps later.

● The No. 41 Dixie Vodka Tony’s Tea driver notched a spot in the top-10 on the lap-96 restart and stayed there for the opening part of the stage.

● On lap 117, Custer reported concerns over his brakes after several cars had been involved in incidents on track. The No. 41 Ford Mustang kept growing tighter on the run and fell back to 14th by lap 159.

● The No. 41 Ford Mustang began to slow with a flat right rear tire on lap 172, bringing out the caution flag. Unfortunately, the team was unable to fix the issue on pit road as the brake rotor was damaged. They took the racecar to the garage for repairs on lap 173 and continued to work until the end of the stage.

● The Ladera Ranch, California, native brought his Ford Mustang back out on the track on lap 218 to re-enter the race in 33rd, 45 laps down.

● The No. 41 Dixie Vodka Tony’s Tea Ford Mustang came down pit road for an unscheduled pit stop on lap 281 after Custer reported vibrations. He rejoined the field and finished the race in 31st.

● Kyle Larson won the inaugural Ally 400 to score his 10th career NASCAR Cup Series victory, his fourth of the season and his third straight. His margin over second-place Ross Chastain was 4.335 seconds.

● Denny Hamlin remains the championship leader after Nashville with a nine-point advantage over second-place Larson.

“Just wasn’t the day we were hoping for at Nashville. Our car was strong and qualified in the top-10, but we had that right-rear flat in the second stage and after going to the garage, we just couldn’t recover. We’ll head to Pocono and try to turn things around.”

The next event on the NASCAR Cup Series schedule is a doubleheader June 26-27 at Pocono (Pa.) Raceway. The first race starts at 3 p.m. EDT on Saturday, and the second race begins at 3:30 p.m. on Sunday. Both races will be broadcast live on NBCSN and SiriusXM NASCAR Radio.