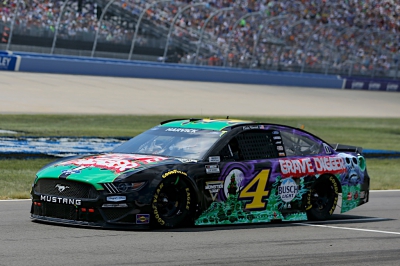 ● The No. 4 Monster Jam/Grave Digger Ford Mustang gained five positions on the opening lap, which ended with the caution flag flying for a single-car incident. Harvick stayed on track and restarted eighth on lap five and maintained his position in the top-10 until pitting from ninth under green on lap 44. He took four tires and adjustments to tighten up the racecar’s loose condition.

● The caution flag flew for a spinning car in turn four during Harvick’s out lap, and he was shown in 17th.

● Less than two laps after the lap-52 restart, Harvick was 20th when the caution flag flew once again for a single-car incident in turn two. He pitted for four tires and chassis adjustments, and restarted 23rd on lap 61.

● Harvick held his relative position and emerged 21st after a two-car incident in turn two brought out the caution flag on lap 78. He said his Monster Jam/Grave Digger Ford was tight in the front, but the rear end needed more attention. He pitted for four tires, fuel and chassis adjustments and restarted 17th on lap 85. He picked up three positions in the final five laps of the stage. He stayed on track during the break after saying his racecar took off better for that short run.

● The No. 4 Monster Jam/Grave Digger Ford Mustang picked up a pair of positions in the early laps of the stage and held position in seventh until the caution flag flew on lap 132 for a spinning car in turn two. Harvick said his racecar felt better, just needed “a little bit of grip” in the center of the corner.” He pitted for four tires, fuel and restarted sixth on lap 138.

● Harvick held position over the next 30 laps, saying his racecar would go loose as the run progressed. He cracked the top-five on lap 170 with a pass of Denny Hamlin, just before the caution flag flew on lap 172 for debris. Harvick pitted for four tires, fuel and adjustments to tighten up the car’s handling and restarted 11th on lap 180, then picked up one more position over the final five laps of the stage. He stayed on track during the break.

● No. 4 Monster Jam/Grave Digger Ford Mustang picked up a position in the opening laps of the stage before the caution flag flew on lap 197 for a single-car incident in turn two. Harvick stayed on track after reporting, “That’s the best I’ve been able to let off the brake and let it roll through the corner.” He restarted seventh on lap 202.

● Harvick was running sixth on lap 216 when he reported his racecar struggled to turn down in the center of the corner and was losing the back end. Moments later, the caution flag flew for a spinning car on the frontstretch. Harvick pitted for tires, fuel and chassis adjustments. He restarted third on lap 222.

● Harvick and the car of William Byron made side-by-side contact in turn two during the restart, after which Harvick reported the Monster Jam/Grave Digger Ford was “super tight.” He was fourth when the caution flag flew for a single-car incident in turn four. He stayed on track and restarted third on lap 232.

● From that point, the Monster Jam/Grave Digger Ford maintained its position in the top-three until eight laps remained while employing fuel-saving mode a majority of the way, and took the checkered flag fifth.

● Harvick earned his fifth top-five and 12th top-10 of the season.

● Kyle Larson won the inaugural Ally 400 to score his 10th career NASCAR Cup Series victory, his fourth of the season and his third in a row. His margin over second-place Ross Chastain was 4.335 seconds.

● Denny Hamlin remains the championship leader after Nashville with a nine-point advantage over second-place Larson.

“Our Monster Jam/Grave Digger Ford Mustang was a lot loose at the beginning and really pretty good the second half of the race. We got some damage there when we made a little contact with the 24 (William Byron) and that made it a little bit tighter. I thought we were better than the 24. The 42 (Ross Chastain) had fresh tires, and the 10 (SHR teammate Aric Almirola), I thought we were better than those cars. The 5 (Kyle Larson) was kind of in a league of his own, but once again the guys did a great job and ground away at it and came away with a top-five as we ran out of gas. I think before our damage we probably had the second-best car at the end and got a little bit of damage on the right side. I got a little bit tight and then ran out of gas off of turn four and lost a couple of spots but, all in all, it was a solid day.”

The next event on the NASCAR Cup Series schedule is a doubleheader June 26-27 at Pocono (Pa.) Raceway. The first race starts at 3 p.m. EDT on Saturday and the second race begins at 3:30 p.m. on Sunday. Both races will be broadcast live on NBCSN and SiriusXM NASCAR Radio.