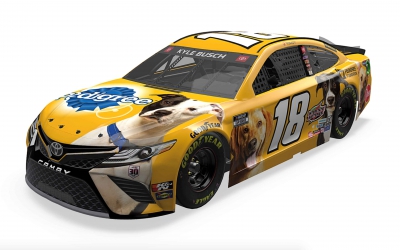 Looking back a decade ago, Nashville (Tenn.) Superspeedway completed what many thought would be its final NASCAR Xfinity Series event. The 300-mile race on July 23, 2011, was won by Carl Edwards and featured just five drivers who are fulltime competitors in the NASCAR Cup Series in 2021 – Ricky Stenhouse Jr., Brad Keselowski, Austin Dillon, Aric Almirola, and Kyle Busch.

In addition to the drivers who raced that day, four others have competed at 1.333-mile concrete oval during their careers who race fulltime today – Denny Hamlin, Joey Logano, Kevin Harvick, Matt DiBenedetto, and Michael McDowell.

When it comes to life, in general, and especially auto racing, it’s never good to say never. After a 10-year hiatus, not only is the Xfinity Series returning to Nashville Superspeedway, along with the NASCAR Camping World Truck Series that used to compete there regularly, but the NASCAR Cup Series will be making its debut at the concrete oval during Sunday’s Ally 300.

Busch, driver of the No. 18 PEDIGREE Foundation Toyota Camry for Joe Gibbs Racing (JGR), has not only had extensive racing history at Nashville, he knows his way to victory lane there, as well. The two-time Cup Series champion competed in three different series at Nashville – Xfinity Series, Truck Series and the ARCA Menards Series. He made his Nashville debut in 2003 and brought home the victory in his only ARCA start there. He was also two-for-two in both his Truck Series starts, with both wins coming from the pole in 2010 and 2011. The 2010 win also happened to be the first-ever victory for his own Kyle Busch Motorsports (KBM) team.

Busch has the most experience at Nashville in the Xfinity Series, having started 10 races there from 2004 through 2011 and scoring four top-five finishes, including a 2009 victory in his JGR Toyota.

In addition to the vast Nashville Superspeedway experience on Busch’s resume, Busch and the No. 18 have their first chance to experience the homecoming of sorts for primary sponsor PEDIGREE and the PEDIGREE Foundation, whose Nashville-area headquarters are just up the road from where racing will return this weekend. Busch’s PEDIGREE Foundation Camry paint scheme will feature adoptable dogs from the Nashville area.

As part of the collaboration, Mars Petcare’s BETTER CITIES FOR PETS Program and PEDIGREE Foundation will host adoption events in Nashville and Charlotte, North Carolina, during the race weekend and will cover all adoption fees for any pets that find loving homes from June 18 to 20. To promote the events, Busch will visit the Humane Society of Charlotte to meet a series of adoptable pets before heading to Nashville for the race weekend. Fans can learn more about how to help by visiting pedigreefoundation.org.

So as Busch heads to Nashville to compete in the historic first race there in NASCAR’s top series, he’s hoping he’ll have an advantage over the competition with his prior experience there as he attempts to become the first driver to win a Cup Series race at the tricky concrete track in his doggone return to Music City.