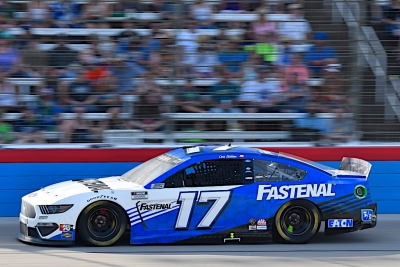 Chris Buescher’s No. 17 Fastenal Ford Mustang was a force to be reckoned with throughout all three stages of Sunday’s NASCAR All-Star Open, but a chaotic opening ten laps left him just on the outside of the main event.

Buescher began the race from the second position, with the winners of each of three stages advancing to the All-Star Race later Sunday evening. He held serve on the opening lap of the race, but NASCAR initiated a review and ultimately decided Buescher had beat the race leader to the start/finish line and black-flagged him.

The Fastenal Racing team pled their case, but were told to complete a pass-through penalty. Fortunately for the team, a caution came out just before they were to complete the penalty under green. Buescher would have to restart from the tail end of the field on the ensuing restart, where he powered up through the field until contact with the No. 47 sent his Ford Mustang spinning onto the banking of Texas Motor Speedway.

Despite the setbacks, Buescher would recompose himself for a strong showing in the 20-lap opening segment. He drove up to eighth place after the two incidents, then continued to work his way to the front of the field and reached 4th place by the end of the second segment.

With just ten laps left to race his way into the main event, Buescher pulled out all the stops but dirty air kept him from completing the final passes. Buescher would finish the event in the third position, just missing out on his second All-Star Race appearance.