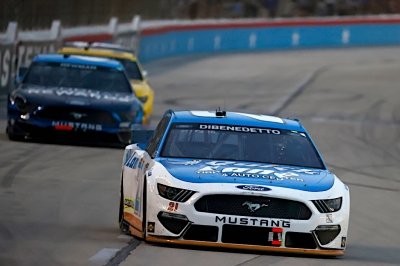 Matt DiBenedetto and the No. 21 Quick Lane Tire and Auto Center Mustang didn’t have quite enough speed to race their way into Sunday’s NASCAR All-Star Race at Texas Motor Speedway. But their fans had stepped up and voted DiBenedetto into the non-points extravaganza, so he was able to join the 21-driver starting field and wound up finishing the 100-lap affair in 17th place.

DiBenedetto started the night by taking the green flag for the NASCAR Open from third place.

That race, divided into three segments, two 20 lap segments followed by a 10 lap segment, offered the winner of each segment a berth in the All-Star race. He ran in the top five throughout the Open, but came short of winning a segment. He finished fourth in the first round, third in the second and second in the third.

Then the results of the fan vote were announced.

“I’m really thankful to the fans who voted us in,” DiBenedetto said. “That was really cool for all of us, pretty special. We were up against some good competition on that.”

Like the Open, the All-Star Race proved to be one in which track position was critical.

Because the drivers who advanced to the All-Star Race from the Open had to start in the rear of the pack, they were at a disadvantage from the start. DiBenedetto ran near the back of the 21-driver field for most of the first two Rounds of the All-Star race.

“We didn’t have great speed but we were able to hang on pretty good when we had track position,” he said, adding that when he did get to start up front he could stay there.

In the third 15-lap Round of the All-Star race, the line-up was set by a full-field inversion of the previous segment, and DiBenedetto started second.

He got the lead just after the drop of the green flag, led the first six laps and finished second in that segment.

DiBenedetto started eighth in the fourth Round, after a partial inversion, and ran as high as fourth before finishing eighth.

In the fifth Round, at 30 laps the longest of the night, he made his mandatory four-tire pit stop after just two laps but a slow stop cost him valuable track position, and he finished 19th. He gained two spots in the final 10-lap run and was scored 17th for the night.

“Once we lost track position, I couldn’t do much in the dirty air,” he said. “But, overall it was a good night, especially winning the fan vote.