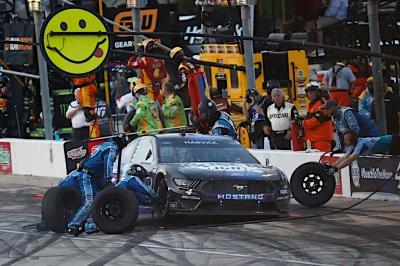 ● The No. 4 #BuschToTheMoon Ford Mustang raced into the top-10 before a caution on the opening lap.

● Harvick raced in and around the top-10 throughout the stage. He radioed to crew chief Rodney Childers that his car was loose in traffic.

● After an inversion of the top-12 drivers, Harvick started second and finished 16th.

● The No. 4 #BuschToTheMoon Ford Mustang got tight during the restart and, with no help from behind, Harvick lost momentum and fell to 15th place.

● Harvick continued to note tight-handling conditions during the first four laps of the stage.

● The No. 4 team pitted at the end of the stage for four tires, fuel and adjustments.

● Due to a full-field invert, Harvick started sixth and finished 15th.

● The No. 4 #BuschToTheMoon Ford Mustang driver held his place inside the top-10 throughout the stage.

● Harvick pitted at the end of the stage for chassis adjustments and fuel.

● The No. 4 team just missed the position to start the next stage on the pole position after the random draw inverted the top-nine cars.

● The No. 4 #BuschToTheMoon Ford Mustang was extremely loose four laps into the stage.

● Harvick continued to lose momentum due to handling issues and fell outside the top-15.

● When green-flag pit stops cycled through, Harvick was ninth.

● On the restart, Harvick was caught in the middle lane and lost momentum, demoting him to 15th.

● The team pitted at the end of the stage for four tires, fuel and adjustments.

● The No. 4 #BuschToTheMoon Ford Mustang driver drove hard in the opening laps, but handling issues continued to mire his day and he dropped to 19th.

● Despite challenges with the car’s handling, Harvick was able to race his way back up to 15th when the checkered flag waved.

● Harvick has made an appearance in every single NASCAR All-Star Race during his 21-year career, the most of any driver eligible for this year’s All-Star Race.

● Kyle Larson won the All-Star Race with a .206 of a second margin of victory over runner-up Brad Keselowski.

The NASCAR Cup Series returns to points-paying racing on Sunday, June 20 with the inaugural Ally 400 at Nashville (Tenn.) Superspeedway. The race gets underway at 3:30 p.m. EDT with live coverage provided by NBCSN and SiriusXM NASCAR Radio.