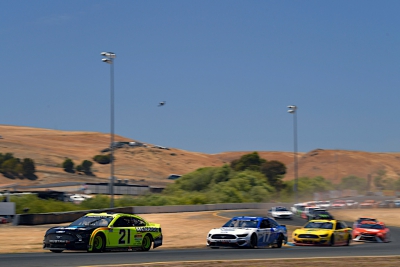 After watching Matt DiBenedetto and the No. 21 Menards/Knauf Insulation team struggle to a 23rd-place finish in Sunday’s Toyota/Save Mart 350 at Sonoma Raceway, Eddie Wood said he’s taking the long view of his team’s slump since a fourth-place finish at Kansas Speedway on May 2. The team has a best finish of 18th and a worst of 24th in that five-race span.

“But I’ve learned that if you keep working hard and doing the things you need to do to improve eventually the pieces start to fall into place and it will turn around.”

“You can’t panic, and you can’t quit,” he said. “You just have to do what you think is best, keep working hard and it’ll eventually turn around.

“It did earlier this year after we had a rough start to the season, and things will get better again.

“I am confident of that. We’re not even to the halfway point of this season, so there’s time to get things fixed and make this year one we’re all proud of.”

At Sonoma, DiBenedetto and the Menards/Knauf team started 17th and showed early signs of speed. They were able to finish ninth in the first 20-lap Stage, earning two bonus points.

DiBenedetto stayed on the track following the caution for Stage One and ran as high as second place before drivers on fresher tires overtook him.

But from that point on, the No. 21 Mustang ran outside the top 10 for the most part and was involved in a couple of late-race fender benders before taking the checkered flag in 23rd place.

DiBenedetto, who remains in 17th place in the Cup Series standings, said that once he fell back in Sunday’s race it was more than he could overcome.

“When we had track position we could hang in there a little bit,” he said. “But we had some trouble on a pit stop and some tire issues and lost our track position.

“When we got buried in the back of the pack it was just a mess. We got banged around some and got some damage on those late-race restarts.

“We just have to do a better job as a team and get out there and execute.”

Up next for DiBenedetto and the Wood Brothers team are the NASCAR All-Star Open - and possibly the All-Star race - at Texas Motor Speedway next Sunday followed by the next Cup Series points race, at Nashville Superspeedway on June 20.