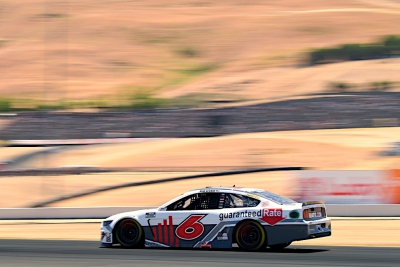 Roush Fenway Racing driver Ryan Newman brought his No. 6 Guaranteed Rate Ford Mustang down pit road for the final time on lap 87 of Sunday’s NASCAR Cup Race at Sonoma Raceway, in hopes that scuffed tires would be the key down the stretch with a handful of laps remaining in the event.

The strategy looked to pay off, with the team picking up several spots before Newman got caught up in a multi-car melee at the end of the race, dropping the No. 6 to a disappointing 33rd place finish.

Newman started the race 24th and while running on a pit strategy that varied from much of the field, ran much of the race between 15th and 25th position. Working off the strategy he started the second stage in 14th position, and advance to as high as 12th on lap 44.

Newman pitted on the final caution and placed scuffed (slightly used) tires on his Guaranteed Rate Ford and restarted in 29th on lap 87. As the field moved into an overtime finish, Newman had moved to 24th and was zoning in on the top 20 when he was struck from behind in the last-lap multi-car accident that sent his car spinning out of control and forced the 33rd-place run.

The NASCAR Cup Series returns to action next weekend at Texas Motor Speedway for the All-Star Race on Sunday, June 13. It is scheduled for 8 p.m. ET on FS1, and coverage can also be heard on MRN and SiriusXM Channel 90.