Kyle Larson sweeps his second-straight race with victory at Sonoma 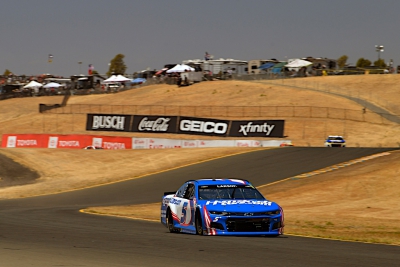 Through a spate of late accidents and restarts, Larson held off Hendrick Motorsports teammate Chase Elliott and three-time Sonoma winner Martin Truex Jr. to claim a second-straight race in which he also swept both the first and second stages.

The victory was Larson’s first at the 2.52-mile road course, his third of the season and the ninth of his career. It was the fourth straight 1-2 finish for Hendrick Motorsports and the first time since 2014 that HMS has posted four-straight wins.

The victory was the 270th for Hendrick, extending the record the organization broke last Sunday.

Coming off last week’s win in the Coca-Cola 600 at Charlotte, Larson made the overtime win look easy. But looks can be deceiving, said the driver of the No. 5 Chevrolet.

“It was not easy,” said Larson, who grew up in nearby Elk Grove, Calif. “Just keeping it on the track is tough, especially when you’ve got two of the best behind you on the last restart.”

Elliott was able to stay on Larson’s bumper after the race went to an overtime restart—the result of a four-car accident in Turn 4 on Lap 88 of a scheduled 90. But Larson inched away over the final two laps.

“I felt like I did a good job on the (restart) before and was able to stretch it out a little bit,” Larson said. “I didn’t want to give it another try at it, but (Chase) kept the pressure on. Martin was strong, too.

“What a car! I thought I would be okay today, but I really didn’t know how I would race—I don’t think any of us really knew with no practice, but our car was really good there, and I can’t say enough about it.”

The closeness of his hometown—east of Sacramento—made the victory that much more satisfying.

“It means a lot,” said Larson, who crossed the finish line .614 seconds ahead of Elliott. “Northern California will always be home to me, even if I live way on the East Coast now … To get back-to-back wins in the Cup Series is something I’ve always dreamed of doing, and to get it done feels great.”

Elliott, the reigning series champion, achieved his best finish at Sonoma, but couldn’t find a way past his teammate.

“I wish I knew (where Larson was stronger),” said Elliott, who has six road course wins to his credit. “I would have tried to give him a little better run. But congrats to Kyle and (crew chief) Cliff (Daniels) and everybody on the 5 team. They’ve been doing an amazing job.

“I’m really proud of our NAPA group, though. I felt like we were a lot better there at the end than we were at the beginning. That’s definitely the best I’ve ever been here at Sonoma.”

Truex came home third, followed by Joey Logano and Kyle Busch, who summed up Larson’s dominance in one sentience.

“The 5 was just out of this world,” Busch said.

Hamlin and Kevin Harvick, who combined for 16 victories in 2020, left Sonoma still winless this season. Harvick was the victim of a seven-car chain reaction crash in Turn 11 on Lap 77 during a rash of four cautions within an 18-lap stretch near the end of the race.

Without a hood or right front fender on his car, Harvick salvaged a 22nd-place result.