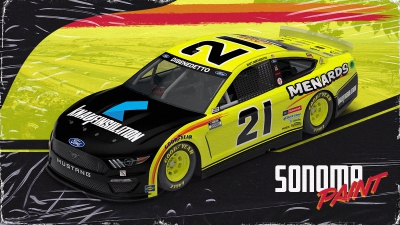 The last time Matt DiBenedetto raced at his home track, Sonoma Raceway, he scored the first-ever top-five finish of his Cup Series career.

He finished fourth in the 2019 while driving for Leavine Family Racing, but hasn’t raced at Sonoma since then because the race was moved in 2020 as NASCAR adjusted its schedule to deal with the pandemic.

Now, DiBenedetto and the No. 21 Menards/Knauf Insulation team is headed back to Sonoma for Sunday’s 350-kilometer run over the original 12-turn, 2.52-mile course, which was brought back in 2019 after NASCAR used a shorter route from 1998-2018.

NASCAR rules for the race mandate the 750-horsepower engine package combined with a low-downforce aero set-up.

DiBenedetto, who will start from 17th place after NASCAR set the starting line-up using a formula based on recent performance, said he’s anxious to pick up where he left off at Sonoma two years ago.

“I finished fourth the last time I was there,” he said. “It’s a fun road course."

And he gets to race in front of some home folks as the track is about two hours southwest of his home town of Grass Valley. He also has relatives that live even closer to the track.

“A home-state race is fun,” DiBenedetto said. “Some of my family usually comes to that race since they live not far from there in Lincoln."

“So this race is a special one.”

There will be no practice prior to the start of Sunday’s 90-lap Toyota/Save Mart 350, which is set to get the green flag just after 1 p.m. (4 p.m. Eastern Time) with TV coverage on FOX Sports 1.