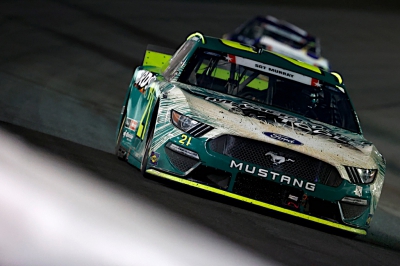 Sunday’s Coca-Cola 600 at Charlotte Motor Speedway, NASCAR’s longest race, seemed especially long for Matt DiBenedetto and the Menards/Masterforce Tools team. DiBenedetto and the No. 21 team never seemed to find the combination they needed to be competitive and wound up 18th, two laps behind the leaders.

“Our Menards/Masterforce Tools Mustang was lacking speed and handling,” DiBenedetto said. “It was very edgy to drive….We were just struggling all night.”

DiBenedetto qualified 22nd and ran outside the top 20 for much of the first two 100-lap Stages, although he did lead two laps during a cycle of green-flag pit stops.

He and the team got a break near the end of the second Stage when the caution flag flew for Kurt Busch’s blown engine. That allowed him to take the wave-around, and he was able to nurse his worn tires and hang on to the lead lap until the end of the Stage when he pitted for fresh tires and fuel.

In the third Stage, DiBenedetto raced inside the top 20 and ran as high as 13th before ending that segment in 19th place.

In the final 100 laps, he ran in the free-pass position for a time, but fell back as the laps wound down.

DiBenedetto said that even as he and the Menards/Masterforce Tools team faced challenges on the race track, they were able to honor the memory of Marine Sgt. Jeremy E. Murray, who had hoped to make the Marines his career, but was killed on Nov. 16, 2005, at age 27 while on his third deployment to Iraq.

Sgt. Murray was honored by the Menards/Masterforce Tools team as part of NASCAR’s 600 Miles of Remembrance program.

“Honoring those who made the ultimate sacrifice to their country is what this Memorial Day weekend is all about,” DiBenedetto said. “That’s important to my family, especially since I have a brother in the military, and it’s important to our race team.”

DiBenedetto and the Wood Brothers team remain 17th in the Cup Series standings heading into next weekend’s race on the road course at Sonoma Raceway.