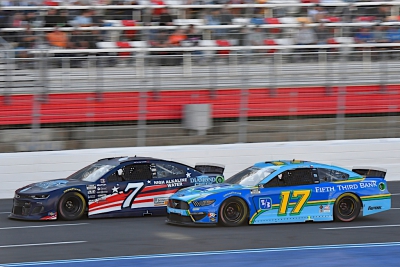 Chris Buescher continued a spectacular run at one of NASCAR’s Crown Jewel events, with an 8th-place finish Sunday night at Charlotte Motor Speedway marking his third straight top-ten in the Coca-Cola 600.

“That was a heck of an effort by our team and Roush Fenway to get our Fifth Third Bank Ford Mustang from a 27th-place starting spot to eighth,” said Buescher, who has scored top 10 finishes in three of his last five starts this season. “To have that drive forward and get up to the top 10 and ride around there all night, and be able to make up spots on long runs, I’m proud of that. It’s a good night. It’s a long race. We executed really well on pit road. Everybody did a really nice job, so I’m proud of that.”

NASCAR’s longest race of the year gave drivers nowhere to hide, with just one natural caution in the 600-mile event. The dearth of yellow flags rewarded teams who kept up with changing track conditions as the sun set, and Buescher took advantage by notching 119 green flag passes – the fifth-most of any driver in the event.

The field was set for Sunday’s race on Saturday morning, with the first true single-car qualifying session since last May’s Coca-Cola 600. The one-lap session saw Buescher qualify 27th, where he would start Sunday’s 400-lap event.

As soon as the green flag dropped, Buescher began to work his way forward through the field. By lap 60, the No. 17 Fifth Third Bank Ford Mustang had already advanced ten positions to 17th, where it would finish the first stage of the race. The opening segment ran completely caution-free, marking the longest green flag run to ever open a Coke 600.

The second stage saw changing track conditions affect much of the field, and Buescher’s progress continued. The first and only natural caution of the race came at lap 172, with the No. 17 in the 15th position. Shortly after the ensuing restart, Buescher entered the top ten for the first time and continued to work forward. He would move up to eighth by the end of the second segment, netting two stage points to aid his playoff push.

Buescher restarted for the third stage from the seventh position, but his line stacked up and he was quickly shuffled back as low as 14th. The Texas native would spend much of the stage reclaiming his lost track position, working his way back to 12th by the third green-white checkered flag of the evening.

Following another round of pit stops, Buescher restarted 14th for the final segment of the event. He flipped the script on the previous restart, rocketing into the top ten within the opening laps. With cooler track temperatures continuing to spread the field out, Buescher worked his way through lapped traffic and battled to pick up every additional spot possible. He would make a pass into the eighth position with just 15 laps to go, where he would ultimately finish the race.