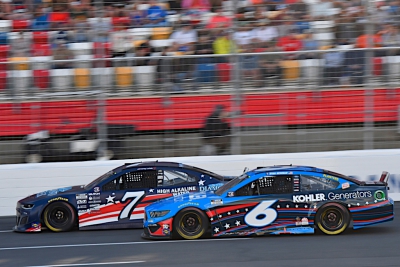 In the sport’s longest race of the season, Ryan Newman appeared to have his Kohler Generators Ford dialed in within the first two stages of racing, before a cut tire with just over 100 laps to go spoiled his evening - relegating him to a 27th-place finish in Sunday night’s Coca-Cola 600 at Charlotte Motor Speedway.

“It’s unfortunate because I felt like we were just figuring out the handling on our car,” Newman said. “It took us a few laps to figure out the handling early on and we just needed some track position, and once we got that in stage two I felt good about where we stood. Unfortunately, you can’t control when a tire will go down and ours put us behind the 8-ball and we just didn’t have enough laps to recover.”

The race itself saw just one natural caution as teams worked to stay close to changing track conditions with the race starting in the sun light, while ending in somewhat cooler temperatures late Sunday evening. Newman’s 600-mile venture began from the 25th spot following a rare qualifying session Saturday morning, one that also followed a lone practice session at the 1.5-mile track Friday night.

Early on the 43-year-old veteran was mostly battling the tight side and was the recipient of the lucky dog after the opening 100 laps in which he ran 19th. From there, he fired off in the same position for the second 100-lap segment.

Newman would long pit and split the stage in half at lap 150 for service on his No. 6 Ford, before one of the two yellows on the evening flew at lap 172 with the Kohler Ford running 17th. Strategy then came into play as Newman and crew chief Scott Graves elected to go the two-tire route, putting the No. 6 in 12th on the ensuring restart, before finishing 17th in the stage.

The team picked back up on pit road though, with Newman restarting stage three in 13th. The No. 6 and teammate Chris Buescher worked solidly in the top-15 as the laps continued to click away, before he again pitted at lap 242; this time for four tires.

By the time the stops cycled through, Newman maintained the 13th spot, but his evening took a turn for the worse at lap 295 when his right front blew in the turn, causing damage to the right side. Newman lost three laps as the team repaired the damage, and with no additional cautions ultimately brought the car home 27th.

The NASCAR Cup Series returns action next weekend at Sonoma Raceway on Sunday, June 6 for another road course event. It is scheduled for 4 p.m. ET on FS1, and coverage can also be heard on PRN and SiriusXM Channel 90.