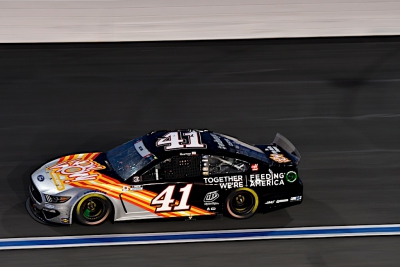 ● The No. 41 Feeding America®/Wow Wow Classic Waffles driver struggled with a tight-handling racecar from the drop of the green flag. Custer reported early that his car was slow in traffic.

● On lap 46, the 23-year-old driver brought his Ford Mustang down pit road during green-flag pit stops for four tires, fuel and a wedge adjustment to combat the ill-handling racecar.

● Custer continued to battle with the balance on his car for the remainder of the stage as the leaders lapped the field. He ultimately ended the first stage 24th, one lap down.

● Under the Stage 1 break, the No. 41 Feeding America®/Wow Wow Classic Waffles driver came down pit road for a set of fresh tires, fuel and a slight wedge adjustment.

● When the race went back to green on lap 207, the No. 41 Feeding America®/Wow Wow Classic Waffles Ford Mustang was still on the tight side.

● The Ladera Ranch native was making moves and got as high as 21st before he reported that the fall-off on his car making it difficult for him to hold position.

● On lap 149, the team brought Custer down pit road for four tires, fuel and another wedge adjustment to try and aid the balance in his Ford Mustang.

● Custer was unable to overcome the car’s lack of balance and speed to ultimately finish the stage in 27th.

● Under the Stage 2 break, the No. 41 Feeding America®/Wow Wow Classic Waffles team brought Custer down pit road for four tires, fuel and another tackle at an adjustment.

● The No. 41 Feeding America®/Wow Wow Classic Waffles driver reported on lap 219 that his car’s water temperature was going up, so the team checked for debris on the grille. The crew told their driver they didn’t see anything and told him to watch the temperature for the remainder of the 600-mile marathon.

● Custer pitted on lap 250 under green-flag stops for tires, fuel and another adjustment after reporting the team still needed to work on the balance of the Ford Mustang.

● For the remainder of the stage, Custer reported that his car was handling better. He ran as high as 25th by the time the lap-295 caution came out. The stage ended under caution.

● During the break, Custer reported that his No. 41 Feeding America®/Wow Wow Classic Waffles Ford Mustang was handling better, but still slow. They pitted for four tires and fuel.

● When the field took the green with 96 laps to go, the No. 41 Feeding America®/Wow Wow Classic Waffles Ford Mustang driver reported that his water temperature was rising again while he was running 23rd.

● Green-flag pit stops began on lap 344. The No. 41 team attempted to catch a caution and had Custer stay out. On lap 354, he was called to come down pit road for the final time for four fresh tires and fuel.

● Custer came out of the pits 25th and started to move toward the top-20 with less than 50 laps to go in the race.

● Ultimately, he came up just short of the top-20, finishing the race in 21st.

“This race is such a long one, and I wish we could’ve gotten a better finish for Feeding America® and Wow Wow Classic Waffles in their first outing with us. We struggled with the balance of the car all day, but it started getting better throughout the race. Once the leaders start passing you, it’s hard to make up for the lost time. We’ll look ahead to Sonoma.”