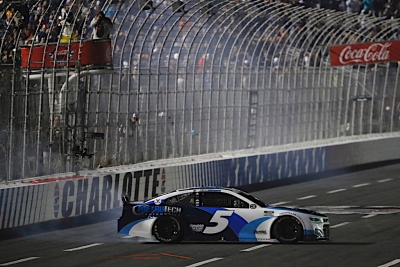 Larson’s win in the Coca-Cola 600 at Charlotte Motor Speedway was the eighth of his career and his second of the season, guaranteeing the driver of the No. 5 Chevrolet a spot in the postseason Playoffs. By the time he crossed the finish line at the end of 400 laps, Larson held a 10.051-second lead over runner-up and teammate Chase Elliott.

The 1-2 finish was the third straight for Hendrick Motorsports. Only third-place finisher Kyle Busch found a way to break up the HMS party, with Hendrick drivers William Byron and Alex Bowman running fourth and fifth, respectively.

“It feels great to be that guy who helped Mr. H break that record finally,” Larson said of the victory that broke a tie with Petty Enterprises for most wins in the series.

Larson signed on with Hendrick to start the 2021 season. The car he drove to victory Sunday night bore the same number as the Chevrolet Geoff Bodine piloted at Martinsville on April 29, 1984 to give Hendrick’s fledgling—and struggling—organization the first of those 269 wins.

“It’s been better than I ever could have imagined,” Larson said of his first 15 races with HMS. “For us to lead as many laps as we’ve got this year (a series-best 1,105), to contend for as many wins as we have and now to get our second win in a crown-jewel event, too, it feels great.

“I’m just very lucky that Mr. H was able to put a deal (together) for me. It’s just awesome. I’m living a dream, for sure.”

NASCAR chairman and CEO Jim France was one of the first to congratulate Hendrick.

“I am proud to congratulate Rick Hendrick and all of Hendrick Motorsports on breaking the all-time wins record for a NASCAR Cup Series race team, long held by the legendary Petty Enterprises team,” France said in a statement issued at the conclusion of the race.

“With nearly 40 years of excellence, Hendrick Motorsports has set the gold standard for race team success. Rick Hendrick has already cemented his legacy as a NASCAR Hall of Famer, and now adds another incredible accomplishment to an exemplary NASCAR career.”

Larson started from the pole and swept the first three stages, but not without challenges from teammates Elliott and Byron.

In fact, in the green-flag run after the second stage break, Byron passed Larson for the lead on Lap 231. During the subsequent exchange of pit stops, however, Larson came in for service one lap earlier than Byron and was roughly one second faster on and off pit road than his teammate.

Larson built a lead of more than 2.5 seconds but spent more than 15 circuits trying to lap the No. 43 Chevrolet of Erik Jones, as Byron closed to his bumper.

“Make him work for it,” Jones’ spotter, Rick Carelli, radioed to his driver as he fought to stay on the lead lap, and Jones certainly followed those instructions.

But Larson finally passed the No. 43 Camaro and began to pull away from Byron before Ryan Newman slammed the outside wall to cause the fourth and final caution of the race on Lap 296. The stage ended under yellow, with Larson the winner.

Coincidentally, it was also Jones who pitted for fresh tires during the final run to the finish, returned to the track ahead of Larson, and helped Larson build his winning margin.

“I just towed with him for a while and stretched my lead out,” said Larson, who for the second time in his career followed three straight runner-up finishes with a pole and a victory.

Austin Dillon ran sixth, followed by Denny Hamlin, Chris Buescher, Tyler Reddick and Kevin Harvick. Hamlin retained the series lead by 76 points over Larson and Byron, who are tied for second in the standings.