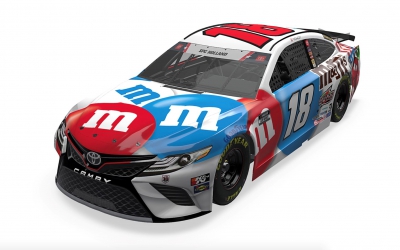 With that, Sunday’s NASCAR Cup Series Coca-Cola 600 at Charlotte (N.C.) Motor Speedway takes on a special meaning for those in the NASCAR community. It will be the annual “600 Miles of Remembrance,” during which each car in the field will carry the name of a fallen soldier on the windshield.

Kyle Busch, driver of the No. 18 M&M’S Red, White & Blue Toyota, has the honor of displaying the name of Pennsylvania Army National Guard Specialist Derek Holland on his windshield during NASCAR’s longest event. Holland, a native of Wind Gap, Pennsylvania, tragically lost his life in June 2008 in Afghanistan. Specialist Holland takes on even more meaningful significance to M&M’S and Mars Wrigley as he was nominated by Mars associate Chad Ace. Not only is Ace a Mars associate, he also served in the U.S. military, and Busch and the M&M’S Red, White, and Blue team will thank him for his service by having Holland ride along with them this weekend at Charlotte.

In addition to honoring the fallen soldier, the No. 18 Toyota will feature a patriotic paint scheme that celebrates M&M’S Red, White & Blue Mix that is available for fans to show their patriotic spirit in stores throughout the summer.

While he had gone to victory lane early and often in the Xfinity and Truck Series, Busch only recently broke through in the Cup Series at Charlotte. His 2017 win in the non-points All-Star Race was his first Cup Series win of any kind at Charlotte. The following year, in 2018, Busch was able to win there again, this time bringing home his first points-paying Cup Series win at the track and adding another crown jewel to his already impressive resume. Even more special, another fallen soldier’s name was able to help Busch on his ride to victory lane. SGT Eric Toth, who lost his life in Iraq in March 2005, adorned his windshield that day.

So, this Memorial Day weekend, Busch will look to bring home his second crown jewel win at Charlotte and, at the same time, honor Specialist Holland and all troops who have given the ultimate sacrifice, as well as those who continue to serve America and the Red, White & Blue.