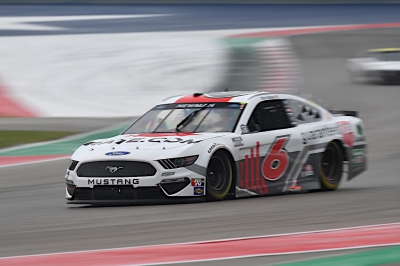 The scheduled 68-lap race at the 20-turn road course – that NASCAR had never visited prior – delivered many variables throughout the weekend, including practice and qualifying sessions, something the NASCAR Cup Series hasn’t experienced in weeks. Once the green flag dropped Sunday, tire strategy quickly came into play before eventually track conditions were deemed too severe.

Newman began his day from the back third of the field after the qualifying session, but quickly maneuvered his way through the field early on. NASCAR mandated teams roll off the grid on rain tires – something the NCS rarely sees – but they were able to change to regular (slick) tires prior to the green flag. Newman was one of the teams to do just that, then at lap three switched back to rain tires as the rain picked up.

The 43-year-old was set in terms of pit strategy through the end of the first stage, where he ultimately finished 13th after the opening 15 laps. After not pitting under the break he restarted ninth at lap 18, before a multi-car incident a few laps later stacked up multiple cars.

Following a red flag, Newman went on to finish 18th in stage two. He would stay out again under the break, before hitting pit road under green with 24 to go. Then, with 15 laps remaining, another incident brought the red flag out, this time permanently as Newman was in 24th, where he finished the afternoon.

Newman and the No. 6 team return to action next weekend at Charlotte Motor Speedway for the Coca-Cola 600. Race coverage is set for 6 p.m. ET Sunday on FOX and PRN, and coverage can also be heard on SiriusXM Channel 90.