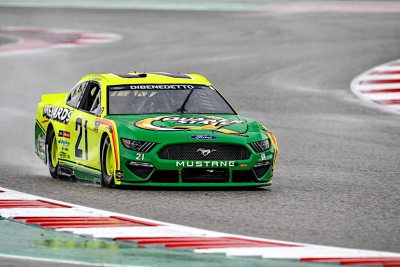 Matt DiBenedetto and the No. 21 Menards/Quaker State crew fought the rain, a vibration issue, damage from an early crash and an electrical problem throughout the running of the rain-shortened EchoPark Texas Grand Prix at Circuit of the Americas before ending up 23rd when the race was called 14 laps short of the scheduled distance.

DiBenedetto qualified 21st for NASCAR’s inaugural Cup race on the 20-turn Austin,Texas track and was on the move from the beginning. He broke into the top 10 after just three laps, and despite a collision with William Byron ended up finishing the first 15-lap Stage in 10th place.

He earned one Stage point for that finish, and got his damage from the Byron incident repaired on the ensuing pit stop only to begin experiencing an issue with the engine in his Menards/Quaker State Mustang cutting off and on. Team officials suspect that water damaged an ignition component, causing the intermittent issues.

For the remainder of the race, DiBenedetto, exhibiting top-10 speed at times, would gain five or six positions when the engine was running fine then lose them back when it suddenly shut off.

He ended Stage Two in 16th place, and was running 17th with 15 laps remaining when he headed to pit road for fresh tires. The decision to pit was a gamble, but had the race run to the scheduled distance he was on pace to finish in the top 15 or better.

But just after DiBenedetto returned to the track, NASCAR officials displayed the red flag due to visibility problems associated with heavy rain. The race, with 14 of the scheduled 68 laps left to run, was not restarted and DiBenedetto wound up 23rd.

Eddie Wood said it was encouraging to see the Menards/Quaker State Mustang running good lap times despite the issues the team faced.

DiBenedetto and the No. 21 team remain 17th in the Cup Series standings heading into Charlotte Motor Speedway and next Sunday’s Coca-Cola 600.