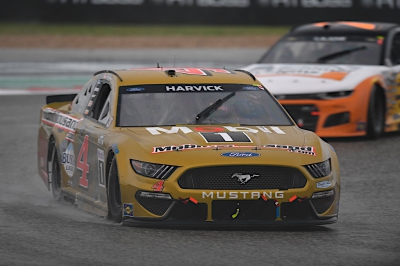 ●  It began to rain just as the race started, and teams had to decide whether to start on slick tires or wet tires. The majority of the field made the decision to start on slicks, including the No. 4 Mobil 1 Ford Mustang team.

●  “That was a tough first couple of laps,” said Harvick who lost a handful of positions as the rain started to increase. Exercising a little self-preservation, he dropped back to 24th before coming to pit road on lap two to switch to wet tires.

●  The yellow caution flag was displayed on lap nine for a single-car accident. Harvick was scored in 24th. The team elected to pit for four tires and fuel. A number of cars elected to stay out during the caution, placing the No. 4 Ford Mustang in 32nd for the restart.

●  Harvick raced his way back to 27th place by the time the first stage ended. He reported that the car wasn’t turning like he needed and that he lacked rear grip.

●  The team elected to stay out during the break, which placed the No. 4 Ford Mustang in 20th to start the second stage.

●  Despite maintaining a presence among the top-25, the handling on the No.4 Ford Mustang wasn’t quite what Harvick needed. “I’m plowing the front tires,” Harvick said to crew chief Rodney Childers on lap 17.

●  Harvick was in 24th place on lap 19 when a number of cars started colliding. Harvick was able to avoid the incidents that unfolded in front of him, but was tagged from behind by another competitor. The hit was hard enough to cause damage to the left-rear quarter panel and send the No. 4 Mobil 1 Ford Mustang into the barriers. That collision caused significant damage.

●  Harvick was able to drive the car to pit road where the team went to work pulling out sheet metal and trying to diagnose the extent of the damage. Trying to stay on the lead lap, the team changed tires and set Harvick back onto the track.

● As the car departed the pit area, Childers noted that the car was leaking oil. This resulted in the team having to retire from the race.

●  Chase Elliott won the inaugural EchoPark Texas Grand Prix to score his 12th career NASCAR Cup Series victory and his first of the season. The race ended under caution due to heavy rain.

●  There were six caution periods for a total of 14 laps.

●  Thirty-one of the 40 drivers in the EchoPark Texas Grand Prix finished on the lead lap.

●  Denny Hamlin remains the championship leader after COTA with a 98-point advantage over second-place William Byron.

The next event on the NASCAR Cup Series schedule is the Coca-Cola 600 on Sunday, May 30 at Charlotte (N.C.) Motor Speedway. The race begins at 6 p.m. EDT with live coverage provided by FOX and SiriusXM NASCAR Radio.