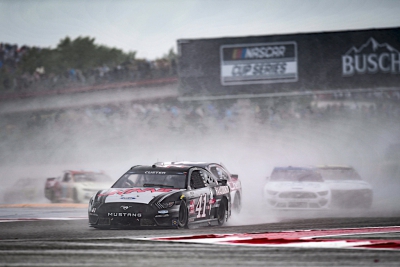 ● Prior to the green flag, NASCAR declared “damp” track conditions, giving teams the option to run rain tires or slicks. All but five cars, including the No. 41 HaasTooling.com Ford Mustang, pitted for slick tires on the final pace lap. Custer held position for the first lap, then pitted again with about half the field to change back to rain tires as light precipitation continued and resumed 25th.

● Custer had climbed to as high as 16th in the opening laps and was 18th when the first caution flag of the day appeared on lap seven for a stalled car on track. He pitted for tires and fuel and restarted 24th on lap nine.

● Contact during the restart left the HaasTooling.com Mustang with slight but manageable front-end damage, and Custer was able to pick up nine positions before the end of the stage. He pitted during the break for fuel only and to inspect the front-end damage.

● The No. 41 HaasTooling.com Ford started the stage from the back of the field after a penalty on pit road during the break. The caution flag flew for multiple incidents around the wet track before the end of the opening lap of the stage, by which time Custer had picked up eight positions to 26th. On lap 24, he pitted for tires and fuel and restarted 24th.

● Custer’s day came to an abrupt end before the restart lap could be completed. He made heavy front-end contact on the backstretch with the rear of the slowed car of Martin Truex Jr., reporting later that his visibility was limited due to weather.

●  Chase Elliott won the inaugural EchoPark Texas Grand Prix to score his 12th career NASCAR Cup Series victory and his first of the season. The race ended under caution due to heavy rain.

●  There were six caution periods for a total of 14 laps.

●  Thirty-one of the 40 drivers in the EchoPark Texas Grand Prix finished on the lead lap.

●  Denny Hamlin remains the championship leader after COTA with a 98-point advantage over second-place William Byron.

“I’m all good. It didn’t hurt as much as I thought it was going to. You just can’t see anything on that backstretch. Somebody was going slower, and by the time you want to slow down, they’re in your front bumper, so there’s no chance of you even missing it. It’s frustrating, but we’ll move on to the next one.”

The next event on the NASCAR Cup Series schedule is the Coca-Cola 600 on Sunday, May 30, at Charlotte (N.C.) Motor Speedway. The race begins at 6 p.m. EDT with live coverage provided by FOX and SiriusXM NASCAR Radio.