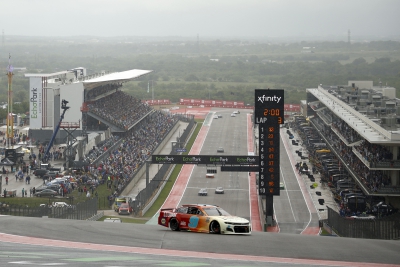 Sunday afternoon, NASCAR’s best hit the track in Austin, Texas for their first ever race at Circuit of the Americas. The 3.43-mile track opened in 2012 hosts the Formula One United States Grand Prix. After 54 laps around the 20-turn course, it was Chase Elliott who found victory lane for the first time this season in the rain-shortened race.

“I couldn’t be more excited. I’ve never won a rain race before so it’s kind of cool. Just super proud of our team just continuing to fight. At the start of the race we weren’t really good so I kept pushing myself and the team made changes during the day and got to where I thought we were on pace to where those guys were at the end,” Chase Elliott said to FOX Sports’ Regan Smith post-race.

Elliott continued by saying, “It’s not the greatest thing ever for it to have a rain race win be your first one, but I think it’s okay if it’s down the road and I’m pretty excited about that.”

Rain was in the forecast all weekend and before the start of the EchoPark Automotive Texas Grand Prix drivers were able to decide if they wanted wet-weather or standard tires during pace laps. Michael McDowell, Ryan Preece, Ricky Stenhouse Jr., and Martin Truex Jr. were the only drivers who decided to stay on wet-weather tires to start the race.

Tyler Reddick won the pole for the event and led the field up into turn one when the green flag was thrown ahead of Kyle Larson in second. At the conclusion of lap one, roughly half the field came to pit road for the wet-weather tires; eventually, those who had standard tires made their way to pit road as the rain continued to fall.

The first caution of the race came on lap seven when Daniel Suarez’s car got stuck in gear and stopped on the racetrack. Michael McDowell inherited the lead by staying out under this caution with Bubba Wallace alongside. Joey Logano stole the lead from McDowell with five laps left in stage one and ultimately cruised to the stage win. Before the green-white-checkered flag was displayed, Matt Dibenedetto hit the rear-end of William Byron, leaving Byron with heavy damage and a flat right-rear tire with two to go in the stage.

After pit stops, Logano and McDowell retained the top-two positions but Kurt Busch stole second place from McDowell as they dove into turn one on the restart.

The third caution came on lap 18 when Ryan Blaney was hit by Chistopher Bell going into turn 12. While braking for the incident, Kevin Harvick was slammed from behind by Bubba Wallace ending both of their days. Brad Keselowski and Ricky Stenhouse Jr. also sustained some damage in this incident.

On the restart, Ross Chastain made it three wide and took the lead from Logano. By the end of the lap, Ryan Preece snagged the lead from Chastain. Going down the backstretch, Martin Truex Jr. slammed into the back of Michael McDowell and then got viciously hit by Cole Custer bringing out the fourth caution and eventually the red flag.

When the yellow flag was displayed eventually, NASCAR made the decision to make restarts single-file to help with visibility. After Chastain came down pit road, Preece led the field into turn one. Kyle Busch was able to make his way past Preece with four laps to go in stage two en route to the stage victory.

On the restart, Erik Jones spun around in the esses and Brad Keselowski spun out on the exit of turn eleven while Kyle Busch stretched his lead to three seconds on the first green flag lap of stage three; they stayed green.

On lap 39, pole-sitter Tyler Reddick made contact with AJ Allmendinger and he lost control of his car in turn 20. The race stayed green but he fell from fifth to 24th. As pit strategy played out in the final stage, Kyle Larson, Ross Chastain, and Alex Bowman led laps. Chase Elliott passed Kyle Busch during the pit sequence, when Bowman made his way to pit road, Elliott cycled around to the lead.

With 14 laps to go, the yellow flag was thrown for visibility issues and track conditions; subsequently the red flag was displayed. As they did earlier, NASCAR brought the Air Titans back out on track to try to remove the standing water off the backstretch.

This red flag ultimately led to NASCAR’s decision to call the race and Chase Elliott, who was short on fuel if the race remained green, was crowned victorious.

The NASCAR Cup Series is back in action next week as they return to "America's Home for Racing." Catch all the action from Charlotte Motor Speedway on Sunday, May 30th at 6:00pm ET for the running of the Coca-Cola 600 on FOX.