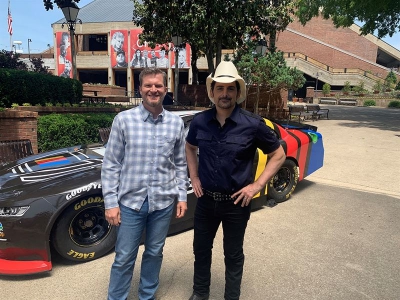 Global country music superstar Brad Paisley and NASCAR on NBC analyst Dale Earnhardt Jr. welcome NASCAR’s return to the City of Nashville in a new NBC Sports national promotional campaign, set to launch during NBC Sports’ coverage of the 105th Running of the Indianapolis 500 on Sunday, May 30 on NBC.

NBC Sports’ national promotional campaign will feature Paisley – a three-time Grammy Award-winner – and Earnhardt Jr. at one of Nashville’s most iconic landmarks – The Grand Ole Opry House – as the duo welcomes NASCAR back to The Music City.

Following a 37-year hiatus, NASCAR’s Cup Series will make its return to Nashville the weekend of June 18-20 – also marking the opening weekend of NBC Sports’ coverage of the 2021 NASCAR season – when Truck, Xfinity and Cup Series compete at Nashville Superspeedway.

Paisley and Earnhardt Jr. will launch NBC Sports’ coverage of the 2021 NASCAR season as hosts of pre-race coverage live from the Peacock Pit Box on pit road at Nashville Superspeedway.

“I’m so excited that NASCAR is returning to Nashville – after 37 long years!” said Paisley. “I get to kick off the 2021 NASCAR season by hosting the NBC Sports’ pre-race coverage with my buddy Dale Jr. – how cool is that going to be?”

“I’m thrilled to work with my friend Brad Paisley to welcome NASCAR back to one of my favorite cities,” said Earnhardt Jr. “I can’t wait to get on the Peacock Pit Box with Brad, celebrate the passionate racing fans in and around Nashville, and kick off NBC Sports’ portion of the NASCAR season in style.”