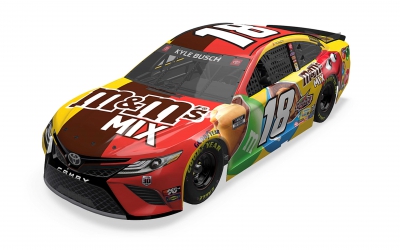 At one point in his career, Kyle Busch would run at least two races on any given weekend on a regular basis. While those weekends have slowed a bit in frequency in recent years, the two-time Cup Series champion will dip his toes in the water five times a year to compete in both the NASCAR Cup Series and NASCAR Xfinity Series on the same weekend.

The Cup and Xfinity Series head to Austin, Texas, this weekend to compete on the 3.426-mile, 20-turn road course at Circuit of Americas (COTA) for the first time ever. And Busch, driver of the No. 18 M&M’S MIX Toyota Camry for Joe Gibbs Racing (JGR) in Sunday’s Cup Series EchoPark Texas Grand Prix, will also be taking part in Saturday’s Xfinity Series race behind the wheel of the No. 54 SKITTLES Gummies Supra.

While this is the first time NASCAR is competing at COTA, the circuit has hosted various other racing events that include the yearly stop for Formula One in America since 2012, as well as IndyCar, Moto GP, sportscars and many others.

Road-course racing has taken on even more importance in the Cup Series this year with the addition of COTA, Road America in Elkhart Lake, Wisconsin, the road courses at Daytona (Fla.) International Speedway and the Indianapolis Motor Speedway added to the traditional stops at Sonoma (Calif.) Raceway, Watkins Glen (N.Y.) International and the Charlotte (N.C.) Motor Speedway Roval. With those additions in mind, it’s more important than ever to have a strong driver and team that can turn left and right this season and beyond.

So, as Busch and his M&M’S MIX team head down to Texas’s capital city, they know they’ll have a challenge ahead of them at COTA this weekend, but the Las Vegas native is hoping to do the “Texas Two-Step” on Saturday and Sunday with a shot at not one but a pair of victories.