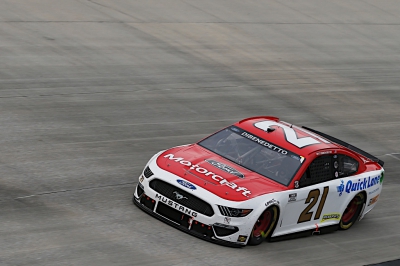 For Matt DiBenedetto and Motorcraft/Quick Lane team, Dover International Speedway lived up to its Monster Mile nickname in Sunday’s Drydene 400.

DiBenedetto’s No. 21 Mustang had handling issues from start to finish, leaving him with a 24th-place finish, five laps behind the leaders.

DiBenedetto lined up 18th for the start of the 400-lap grind on the one-mile concrete oval. He was able to move up in the initial laps, gaining three spots in the first five laps. He was running 20th when the Competition Caution flag flew after 36 laps. But from that point on, he ran mostly outside the top 20 for the remainder of the race.

DiBenedetto said his team tried some different things set-up wise after failing to meet their expectations at Dover last year.

“We tried to throw some things at our Motorcraft/Quick Lane Mustang going into this weekend, and unfortunately it didn’t work out,” DiBenedetto said, adding that he pushed the ill-handling car as hard as he could without taking undue risks. “We just had to be smart.”

Eddie Wood said he and the entire team are disappointed but will move on.

“We had string of good finishes going, but we’ve stumbled the past two weeks,” he said. “We are a better team than this, and we’ll turn it around.”

Next up for DiBenedetto and the Wood Brothers team is the first-ever NASCAR race on Circuit of the Americas, a road course in Austin, Texas. The weekend opens for the Cup Series with practice next Saturday morning. Qualifying is set for Sunday morning, followed by the 68-lap EchoPark Texas Grand Prix on Sunday afternoon.